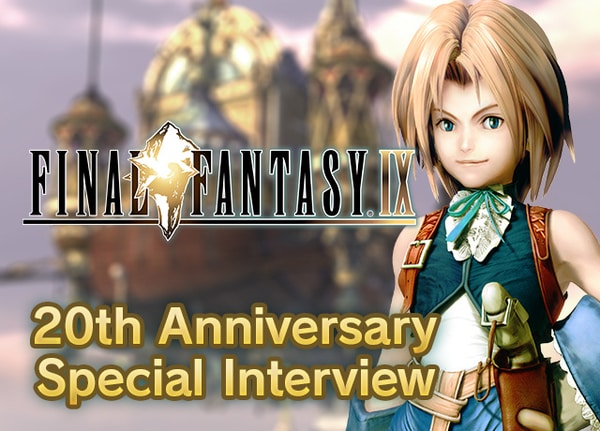 The first of three interviews for the 20th anniversary of Final Fantasy IX is now up via the Final Fantasy Portal Site. Kazuhiko Aoki, the event design and scenario writer for FFIX, is the first to be featured and will be followed by interviews with artist Toshiyuki Itahana, and director Hiroyuki Ito. You can see the full first interview below, courtesy of Gematsu:

Aoki: “The slogans ‘returning to roots’ and ‘return of the crystal’ were there from the start. That’s why the setting of the game also has a medieval fantasy theme.”

―It is true that compared to the science fiction elements of FFVII and FFVIII, Final Fantasy IX made a sudden return to classic fantasy. There were even references to past FF titles, like character and vehicle names. Were those concepts also planned to be included from the beginning of development under the theme of “returning to roots”?

Aoki: “There were some things that were planned from the beginning, and then there were other elements that came about from those in charge of each part of the game during the creation process.

“The newborn chocobo, named Bobby Corwen…smash those names together and you get Boco.

“The foundation is 10 percent, and the remaining 90 percent comes from individual creators putting their own ideas and heart into a project. I think that’s the creation process of not only FF, but all games from Square Enix.”

―Each main character of Final Fantasy IX carries their own background story into the battles they face. Do you have a favorite character? Please tell us your reasons as well, if you have any.

Aoki: “I did my best not to have any favorites, so as not to be biased toward any specific character.

“There were backstories we wanted to elaborate on more, but sadly had to give up on due to time and data constraints.

“At the time I wished I could have developed how Zidane is afflicted by the difference in social status between him and Garnet a little more. Illustrating the breakdown of relations with the nobles in Treno due to their disapproval of Zidane and Garnet’s relationship, Zidane butting up against the social confines he faces and the incredible power Garnet holds as royalty, and how Zidane gets back up on his feet despite all of that—I felt that would have done a lot to help further portray him as a character.”

―The NPCs are also very well developed. What about them?

Aoki: “I don’t have any biases when it comes to NPC characters either. There actually wasn’t any differentiation in my mind between main characters and sub characters. Once the game’s story started to come to life on screen, my drive to develop each character even further – the steadfast reliability of Marcus or Garnet’s internal struggles, for example—only got stronger.”

―The Tantalus members Genero, Zenero, Benero and all their siblings are an unusual bunch. How did they come to be?

Aoki: “There wasn’t a trace of them until right before the game went gold. Not only limited to Final Fantasy IX, each FF series title has a period of about three to four months of quality improvements and brushing up after all elements that will be included in a game are implemented. How can we make it more interesting, what would make it easier to understand, what new discoveries can we find to add to the experience…as a creator you approach the process with a feeling similar to recreating something entirely. Those siblings came about suddenly right in the middle of that final tweaking for Final Fantasy IX.”

―The characters in Final Fantasy IX are built shorter than in previous FF games. Was there a reason for that?

Aoki: “I don’t know the reason for making the characters shorter in stature, but I did often hear that the cutscene team had a hard time making use of the know-how they gained working on Final Fantasy VIII. It was apparently a lot of trial and error.

“The characters in Final Fantasy IX excel at showing a certain sweetness or silliness, but even when they take on a totally different serious tone their expressions are so genuine. I feel that Final Fantasy IX had quite a good balance going in that sense.”

―Final Fantasy IX is known for its many popular and memorable lines. Whose idea was it to put together the loading screen of CG screenshots overlaid with words from the game and art?

Aoki: “The cutscene leader and event staff made that by picking out lines from the game. It was also the manifestation of a strong desire to show what kind of characters these were.”

―There were also many monsters with unique gimmicks, such as Ragtime Mouse’s quiz-style battle. Do you have a favorite monster or gimmick used by one?

Aoki: “I’m not sure if you could call it a unique monster, but my favorite are the black mages who appear in Cleyra. Your party characters don’t do a victory pose even if you win against them. That came from the battle system team’s consideration of the scene those battles take place in. You grow used to the characters celebrating when they win a battle, so I was really surprised the first time I saw that.

“I don’t know if this is still true, but development happened with next to no meetings between the event and battle design teams. Although that’s not to say that those teams didn’t get along.”

―Final Fantasy IX has a lot of mini games, many of which are quite difficult. Are there any you find particularly memorable?

Aoki: “Chocobo Hot and Cold. It came from the director wanting some contents that would allow traveling all over the game world. The concept came together in less than 30 minutes, but the actual creators who worked on the mini-game put a lot of time into it. Every last detail was done with such care.”

―Final Fantasy IX’s soundtrack was handled by Mr. Nobuo Uematsu. We feel that music is another important factor in expressing characters or story. If there are any songs from Final Fantasy IX that really stand out in your memory, please tell us about them.

Aoki: “That would be the song that Mr. Uematsu played for me the first time he worked at the Hawaii office.

“It was in response to me asking if he had any recommended songs from the new game—I got an idea for part of the story the second it came on. That song would eventually be titled ‘You’re Not Alone.’

“I asked, ‘Are there going to be any more changes to it?’ and he responded, ‘Yes, sorry… I’d like to tweak it a little more.’ It wasn’t finalized until the last minute, so I’m sure he really struggled with the composition of that piece.”

―Was there anything during development that was especially challenging or that sticks out in your mind?

Aoki: “The last few weeks were a battle with data restrictions. We had data increasing every day, having to think about where to divide the story so we’d end up with an amount that fit on each of the four discs. That fine-tuning took some real mental gymnastics.”

―If there’s anything else from your experiences during the development of Final Fantasy IX or messages for the many people who still love Final Fantasy IX you’d be willing to share, we would love to hear it.

Aoki: “There were about 300 people at the party celebrating Final Fantasy IX’s completion. It was developed by a team divided between Japan and Hawaii, so about one-third of the faces there I had never seen before…I was surprised all over again at how many people were involved in the project.

“I’m incredibly happy that Final Fantasy IX is loved by so many people; that’s been a huge motivator and confidence booster when facing jobs I’ve had since. I think that’s true not only for me, but also the many creators who worked on Final Fantasy IX as well. It would be nice to celebrate the game’s 20th anniversary with everyone who was at the post-launch party.

“Near the end of that party, there was a moment when the sound effect team went up on the venue’s stage. ‘In Final Fantasy X, there’s going to be this thing called Blitzball, and there will be a scene with the spectators cheering. We’d love if you would all be willing to help with that!’ they said. And I thought ‘…Oh, they’ve already started working on X.’ Just when I thought things were finished, they had already begun a new Final Fantasy. It really hit me being there, this is how the Final Fantasy series continues on forever.”

―Thank you for your time today!