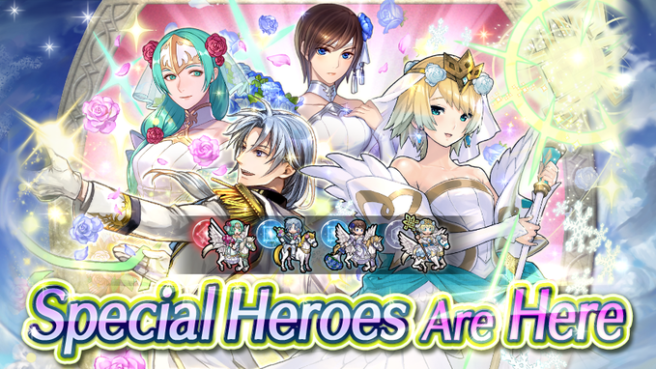 Fire Emblem Heroes has brought back it’s bridal heroes in a summoning showcase. Your first summon won’t cost orbs and the heroes included are in the picture above.

Next up, there are new weapons being added to  the weapon refinery, including: Stalwart Sword (Draug: Gentle Giant), Hewn Lance (Donnel: Village Hero), Sniper’s Bow (Clarisse: Sniper in the Dark), and Great Flame (Myrrh: Great Dragon). These are coming soon and are not yet available.

Finally, a few features will be receiving slight updates such as the lineup of the Limited-Time Combat Manuals and new mechanics in Mjölnir’s Strike. The details of these changes are included below:

■ Mjölnir’s Strike being updated
○ Some mechanisms will have their level cap increased.
・ Heroic Banner: up to level 4