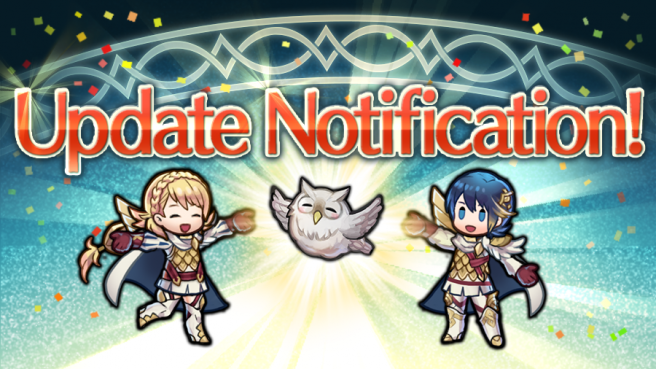 Intelligent Systems has announced that a new update is headed to Fire Emblem Heroes next week. The new update will include new skills, events, and more. Here are the full patch notes:

The Hall of Forms is being updated

Two skills each will be offered for the A, B, and C skill slots on infernal difficulty maps in the Hall of Forms (floors 13 and up). Also, the skills that appear there will only be exclusive skills or skills that cost 240 SP or more.

■ The Filter feature is being updated

We will be adding a Skill Search to the Filter feature, making it easier to search for Heroes by skills on the Edit Teams or Inherit Skill screens.

■ New skills are being added for some Legendary Heroes

Of the Heroes that appear in Legendary Hero Remixes, Eirika: Graceful Resolve and Lucina: Glorious Archer are gaining new skills.

・ A Skill
Atk/Spd Solo 4
If unit is not adjacent to an ally, grants
Atk/Spd+7 during combat.

(Unit moves according to movement type. Once
per turn. Cannot attack or assist. Only highest
value applied. Does not stack. After moving,
if a skill that grants another action would be
triggered (like with Galeforce), Canto will
trigger after the granted action. Unit’s base
movement has no effect on movement granted.
Cannot warp (using skills like Wings of Mercy)
a distance greater than ２ space(s).)

This skill can only be equipped by its original unit.

・ Assist Skill
Future Vision II
Range: 1
Unit and target ally swap spaces. Inflicts
Atk/Def-7 on nearest foes within 4 spaces
of both unit and target through their next
actions. Grants another action to unit.
(Additional action granted once per turn only.)
This skill can only be equipped by its original unit.

Eirika: Graceful Resolve and Lucina: Glorious Archer will be getting new weapon skills to refine at the same time, so be sure to check the section of this notification labeled “New weapon skills and weapons to refine are being added” in conjunction with this section.

With the release of Ver. 6.1.0, players will be able to obtain Divine Codes (Ephemera 1) from events and exchange them from an updated lineup of Limited-Time Combat Manuals using the Compile Combat Manual feature.

Divine Codes (Ephemera 1) will be able to be exchanged for the following Combat Manuals:

The following Heroes will be able to learn these new character-specific weapon skills at 5★:

・ The weapons above can be upgraded in the Weapon Refinery after they have been obtained.
・ To learn weapon skills, tap Allies, then Ally Growth, and then Learn Skills.

Thögn
Hero who can learn this skill: Lucina: Glorious Archer

■ Summoner Duels is being updated.

○ We will improve the controls when Double Tap to Wait is off.

Currently, Double Tap to Wait is always on in Summoner Duels, even if you have it turned off in the game’s settings. In order to help prevent players from unintentionally ending turns early, we will revise it so when Double Tap to Wait is turned off in Summoner Duels, and you have Heroes who can still make actions or are affected by Canto, you will need to tap three times to wait.

Regarding Canto, this will be applied in situations outside of Summoner Duels as well.

Note: The game’s behavior when Double Tap to Wait is turned on will be unchanged by the update.

○ We will improve a portion of the game’s behavior when a communications error occurs.

You can return all of a lost battle’s Aether cost up to 7 times by placing a Level 7 Escape Ladder. Be sure to put this structure to good use!

・ Deluge Fountain: up to level 5

○ You will be able to change your name from the Edit Profile Card screen.

A button that allows you to edit your name will be added to the Edit Profile Card screen, and the same dialogue that is displayed in the Misc. screen will be displayed.

The new update is scheduled to arrive on January 6