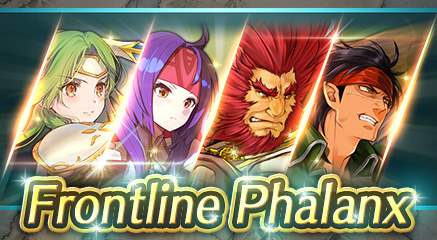 Fire Emblem Heroes’ newest update is out now (version 4.9.0), setting up an event called Frontline Phalanx and bringing a feature to change Hero traits. Frontline Phalanx is not live quite yet but this update will add the event area and players will be able to access it when it goes live on September 15, 2020 at 12:00 p.m. PT.

A feature that has been added for immediate use is the ability to change a Hero’s asset or flaw using items called Trait Fruit. The specifics of this feature are listed below for more information, as well as the full patch notes.

4.9.0 Sep 7, 2020
・ A new event, Frontline Phalanx, will kick off in mid-September. Work with your fellow summoners to support Heroes in other worlds!

・ A feature that allows you to change Hero traits using the Trait Fruit item has been added.

■ A new event, Frontline Phalanx, has been added
Frontline Phalanx is a new event in which summoners send their support to Heroes in other worlds struggling against the odds.
Faced with an overwhelming force, these Heroes are in desperate need of your help. Provide the Hero of your choice with
support to grant them strength. If you’re really feeling generous, you can even use a Guardian Shield to increase their chance of success.
Use the tools at your disposal to save the Heroes from certain defeat!

The first Frontline Phalanx event will begin on 9/15/2020 12:00 p.m.(PT) Further details on how to play will be included in the event preview notification.
If you haven’t seen the sneak peek included in the Feh Channel broadcast from August 13, be sure to check it out!

■ A feature to change Hero traits has been added
Players may now change a Hero’s asset or flaw using items called Trait Fruit.

Traits (assets and flaws)
Fire Emblem Heroes recreates the variation in character growth stats in the Fire Emblem series by assigning stat values that vary slightly between Heroes.
When comparing two of the same Heroes at level 1, one of them may have one more or one less HP, Atk, Spd, Def, or Res. When a particular stat is comparatively higher, it is called an asset. When a particular stat is comparatively lower, it is called a flaw.
There are a total of 21 individual stat arrangements, including the possibility of there being no asset and flaw. When a Hero is summoned, they have an equal chance of appearing with any one of these 21 stat arrangements (excluding Heroes from the Free 5★ Summon, who are always summoned with no asset and flaw).
After a Hero’s level has been raised to 40, their asset stat will be three or four points higher than other instances of the same Hero, and their flaw stat will be three or four points lower. (These values are predetermined for each specific Hero.)

Players may choose the combination of asset and flaw at their discretion. The traits of any Hero may be changed in this way, including those of Forma allies obtained with Forma Souls.

Trait Fruit will appear as rewards in the Arena and Resonant Battles from the season starting on 9/8/2020 12:00 p.m.(PT), and in Mjölnir’s Strike and Forging Bonds after the release of Ver. 4.9.0.
What’s more, you can get 100 Trait Fruit right away by completing quests celebrating the debut of the Frontline Phalanx event. Don’t miss this chance to get your hands on enough Trait Fruit to change your favorite Hero’s traits!

Notes:
・ Changing a Hero’s traits can also affect how their stats will increase when merged and when using Dragonflowers. (The value of the stat total will be unchanged.)
・ Depending on the Hero’s level when their traits are changed, the amount that their stats change may vary—but their stats at level 40 will match any other instance of that Hero with the same traits also at level 40.

With the release of Ver. 4.9.0, players may now obtain Divine Codes (Ephemera 9 ) from events and exchange them for an updated lineup of Limited-Time Combat Manuals using the Compile Combat Manual feature.

■ New weapons to refine have been added

The following weapons can be upgraded or gain additional special effects by using Arena Medals and Divine Dew:

Maltet
Hero who can learn this skill: Hector: Brave Warrior

Hliðskjálf
Hero who can learn this skill: Veronica: Brave Princess

■ Aether Raids and Aether Resort have been updated

○ Some structures have had their level cap increased.
・ Bright Shrine (O/D): up to level 7

○ Some mechanisms have had their level cap increased.
・ Askran Seal: up to level 4

・ When presenting opponents in Aether Raids, the game will attempt to prioritize the opponents whom players have been matched with less frequently.

・ A link to Learn with Sharena! has been added to the Allies menu.

Currently, Fire Emblem Heroes supports iOS 8.0 or higher. After an update planned for November 2020, however, the game will require iOS 10.0 or higher.

After the update is released, players using iOS 9 or lower will no longer be able to download, update, or access the game.
If you will be affected by this change, please consider updating your device’s iOS to version 10.0 or higher if possible.

■ For customers subscribed to Feh Pass

After the update in November 2020, the Feh Pass service will no longer be accessible on unsupported devices.
Since Feh Pass is a subscription service, you will continue to be automatically charged for your subscription unless you cancel automatic renewal.

How to cancel automatic renewal.

If you cannot perform the above procedure: