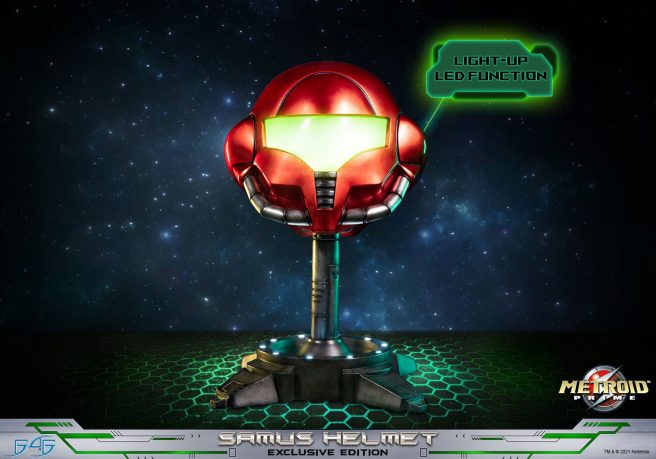 First 4 Figures has revealed a brand new life-size replica statue of Samus’ helmet from Metroid Prime. It comes in standard and “exclusive” versions, and if you opt for the latter, it’ll feature LED functionality for the visor and dots around the base. Also, First 4 Figures says that “the mount on the base where the helmet rests can now be manually rotated a full 360 degrees, giving you the option to display your base in an X-shaped pattern, as opposed to the fixed plus-sign shape of the Standard Edition.”

The Varia Suit is one of Samus Aran’s many equipable space suits in the Metroid series and is the armor she starts with in Metroid Prime. Although the suit is predominantly orange in color, the helmet and the upper half of the torso are red. And just like in the games, her helmet, and the entire Varia Suit for that matter, has a shiny and metallic finish to it, just like the replica.

As for the base it’s mounted on, the design of it replicates the Save Stations in the Metroid Prime games, which, as the name implies, is where you save the progress of your games.

We also have the following video: