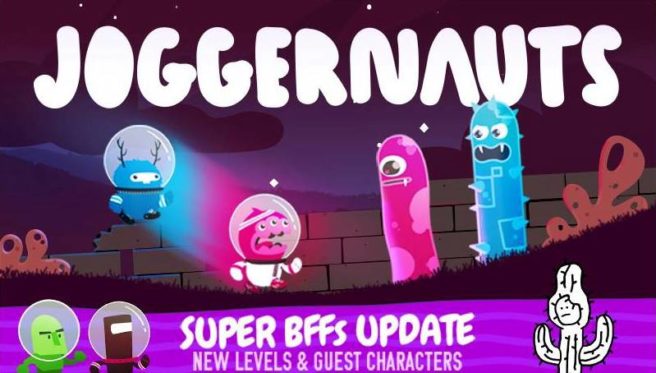 Joggernauts updated to version 1.1.0 this week complete with new content. The team added in guest characters, new levels, and more.

We now have full details on what’s found in the update – including some of the smaller points. Find the lowdown from developer Space Mace below.

C.O.A.C.H. reports from the damaged Joggernauts ship that new escape pods have crash landed on the moons of Splorg! Also, stowaways were detected in the cargo holds… C.O.A.C.H. said something about “other indie games” and also added “whatever that means.”

– Cowpokes from West of Loathing were found in a makeshift saloon. Which is odd because normally space ships don’t have saloons, and definitely not in their cargo rooms. I mean, there was that one TNG episode, but… well, nevermind.
– Hue and Val from Runbow were discovered trying to turn a box of Switchalizer 5000s into some sort of color-based racing game.
– CommanderVideo from Bit.Trip Runner managed to climb a set of stairs, slide into an escape po, and land on the moon Splizorp. He should be easy to find in one of the new levels, though.

There are three brand new levels in Joggernauts, two of which are in the very first world. These are all escape pod rescue missions where you won’t find more trophies, but you will find unlockable characters.

For these levels, we focused on a more family friendly level of difficulty, but there are some treats for more advanced players as well. The levels have new art and bangin’ new songs, so we hope you enjoy them!

Did you know Joggernauts has a Modifiers menu that lets you adjust the game’s speed and the number of shared hearts for your team? Well, now C.O.A.C.H. is gonna make darn sure everybody knows about it!

We’ve also made the Modifiers menu accessible during level play from the pause menu. You will have to restart the level from the nearest checkpoint, but it is a lot more convenient than having to go back to the world map to make changes.

Even with these Modifiers, we’ve had feedback that levels 1-6 and 1-7 had some sections that were too difficult for the first world. We agreed! We’ve made some minor mechanical changes you might not even notice visually, but that will hopefully make the learning curve not too steep.

Finally, one of the toughest things about the Wagglers (our caterpillar-like creatures in the first world) is knowing when it is safe for the next color to switch! We made a tweak to the animation for that critter that will hopefully better signal your timing.

– Various minor bug fixes
– Fixed label on Checkpoints modifiers to make it clear what it actually does
– Make an attempt to actually teach people about jetpacks before they really need to use them
– World maps have a little bit of marker animations and difficulty signage added
– Marked the levels that have hdiden characters and put a progress marker in the HUD for wehther you’ve done the unlocking or not
– C.O.A.C.H. has two, maybe even three, jokes now
– Semi-hidden hat technology
– There are more like 7 new characters, technically