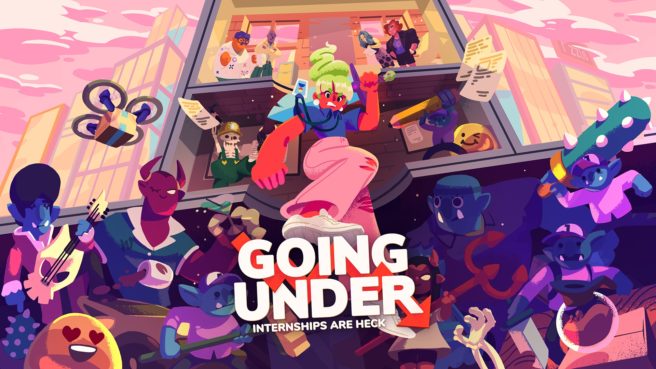 Publisher Team17 and developer Aggro Crab Games have provided an update on Going Under, the satirical dungeon crawler. The game is now confirmed for launch in Q3 2020.

Accompanying today’s news, a new trailer has been shared. We have that below along with some general information about Going Under.

Set in the colourful (yet dystopian) corporate world of tech giant Cubicle and their disruptive drink brand Fizzle, Going Under sees players take on the role of marketing intern, Jackie Fiasco, as she hacks and slashes at the monstrous employees and CEOs of cursed tech start-ups across a series of procedurally generated dungeons.

Key features:
– The future is wack: Battle through the procedurally-generated remains of failed and cursed tech start-ups set in the dystopian city of Neo Cascadia
– Flexible fighting: Potted plants, giant pencils, laptops, and body pillows all become weapons for Jackie as she faces the monsters created from the former employees of the start-ups
– Unlockable abilities: Combine skills bought from the company’s café for a selection of monster-beating synergies!
– Colourful co-workers: Complete tasks for your fellow employees to unlock them as mentors and gain access to their powerful, run-changing abilities
– Horrible bosses: Overcome the CEOs of the dungeons based on dating sites, gig economy recruiters, and cryptocurrency to help boost your employer’s bottom line.