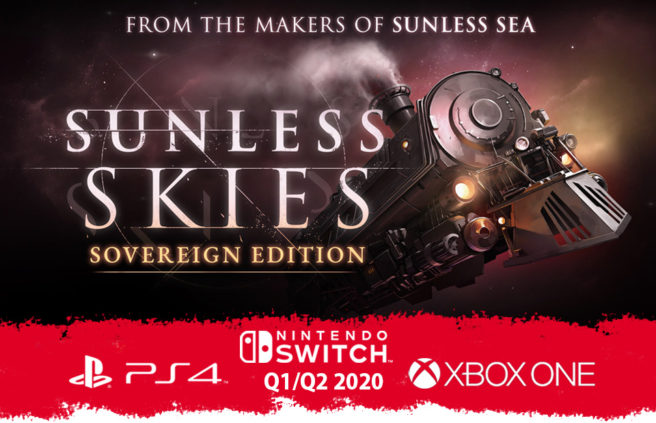 Publisher Digerati and developer Failbetter Games have announced that the Kickstarter-funded gothic horror RPG Sunless Skies: Sovereign Edition is coming to Switch. It’ll be out on Nintendo’s console in the first half of 2020.

Also confirmed today is that Sunless Sea: Zubmariner, another gothic horror RPG from Failbetter Games, will be making its way to Switch. The title is also slated for later in 2020.

Sunless Skies: Sovereign Edition is a Gothic Horror roleplay game with a focus on exploration and exquisite storytelling. Ready your star-faring engine, and venture into an expanse of hostile factions, lurking deities, forbidden knowledge, vast fortune, and fates worse than death.

– A narrative RPG set in the Fallen London universe.
– Explore four regions: celestial wilderness, impossible industrial empire, pagan midnight expanse, and the mysterious Blue Kingdom.
– Choose your crew and your fate. Reveal your captain’s history and skills. Change and be changed by the world.
– Danger lurks in the heavens. Fight or flee from sky-beasts and enemy ships, and balance fuel, supplies and hunger to carve out a life in the skies.
– 800,000+ words of intertwining stories with a depth and richness unlike anything else in games

Take the helm of your zubmarine and set sail for the unknown! Zubmariner is the first expansion to Sunless Sea: deeper, darker, and more marvellous than anything you’ve seen before.

All the powers of the Neath agree: there is Nothing of Consequence beneath the Zee. They are lying. You’ve heard there are fortunes to be made by those brave enough – or hungry enough – to dare the deeps.

Disturb the aberrant societies that flourish in the dark. Defy wreckers. Seduce a Drownie. Embrace or condemn the distinctly un-British customs of these cold, fathomless places.

You will definitely die. Will your next captain dive?

– More of the deep, compelling world of Sunless Sea and Fallen London, packed with stories and secrets. Plunder mournful wrecks on the zee-bed. Dive into unplumbed abysses and claim their eerie blessings. Seek immortality.
– More beautiful, hand drawn art. Witness the marvels beneath the Sea of Statues and the Principles of Coral. Visit the quaint undersea parish of Low Barnet.
– Convert your ship into a zubmarine and dive anywhere in open water to discover new cities, zee-beasts and environments to terrify your crew and slake your hungers.
– 11 new underzee ports, each with their own tales and opportunities for the enterprising Trespasser. Visit Dahut, the city of drowned delights. Brave Wrack, where a Fair King rules the unforgivable. Explore Anthe, and sharpen your tongue, your liver, and your spleen.
– New enemies to face, from the cunning Wreckship to the inexorable Constant Companion.
– Discover the treasures the zee has claimed. Explore ancient wrecks, avoid hostile witherweed, discover the unexploded Unclear Bomb.
– Seek immortality in a new ambition! Track down the Seven Against Nidah, who once came within reach of eternal life. Can you succeed where they failed?
– Sanity is scarcer. Death is closer. We warned you, Trespasser. You should not have come.