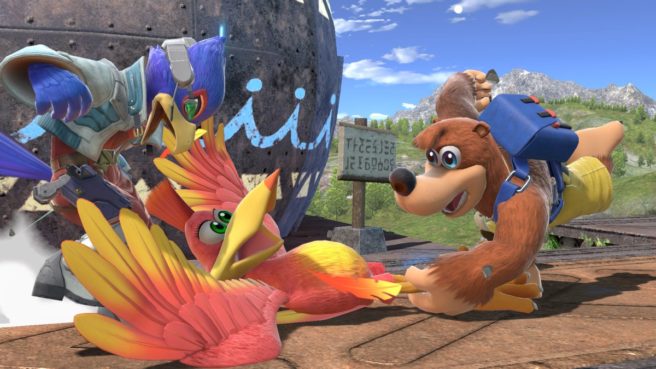 In an interview with VGC, Kirkhope explained how he got involved. Here’s what he shared with the site:

“In about January this year I received a message from Davide Soliani, the creative director on Mario Rabbids, who said Nintendo were asking for my contact information. He said, ‘can I pass it on to them?’ and I was like, ‘too f***ing right!’ I think it was Nintendo’s idea that they wanted the original composer. This had been going on long before they talked to me and they must have been talking to Rare at the back end of last year. A couple of days went by and I eventually got an email from Nintendo saying that they had a piece of music they’d like my assistance on and that they really loved what I did with the Princess Peach theme in Mario Rabbids. That was it.

So my brain was going mad trying to work out what it could be. I did quickly wonder if it could be Banjo in Smash Bros., but then I thought it couldn’t be that because they always use their own Japanese composers to remix the tunes for that game. They never get the actual composers: even David Wise didn’t get to do his Donkey Kong stuff for K Rool, which I didn’t understand.

So I thought it couldn’t be that. I wondered whether it might be Rabbid Peach as a playable character in Smash, or something like that.

I think it was Nintendo’s idea that they wanted the original composer. This had been going on long before they talked to me and they must have been talking to Rare at the back end of last year. I started thinking what the most recognisable Banjo-Kazooie tune would be. I went through a few different ideas like Mad Monster Mansion, Freezeezy Peak or Treasure Trove Cove, but eventually settled on Spiral Mountain. I thought that would be the most recognisable of all of them. I didn’t actually know the Banjo stage in the game was Spiral Mountain, so it was pretty handy when I found out I’d accidentally matched the tune with the stage. Maybe they should’ve told me at the start!”

When I have to redo any of my own stuff, like in Yooka-Laylee which was very much Banjo style, I don’t want to do it almost. I’m not great at going back to old stuff – I usually end up making it worse! But once I started it, it was great fun. But I had to get it right for the fans. Nintendo Japan also asked me to weave in some references to other Banjo levels, so I put in bits of melody from other tunes. It’s up to the fans to spot them!

I think it is significant that Banjo is back on a Nintendo system. They were born on Nintendo consoles. I feel that their home is with Nintendo, but that’s just my personal opinion and I think the fans definitely agree.”