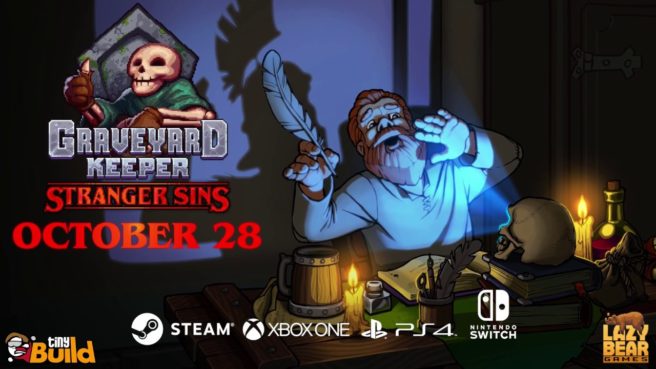 New Stranger Sins DLC is coming to the cemetery management sim Graveyard Keeper on October 28, publisher tinyBuild and developer Lazy Bear Games have announced. It includes 4-8 hours of gameplay and lets players manage their own tavern.

Here’s an overview of Stranger Sins, along with a trailer:

4-8 hours of extra gameplay.
Build and run your own tavern. Finally you will have your own bar!
Arrange the Rat race and Stand-up events.
Get to know villagers better by completing dozens of new quests.
Help Gerry to do the total recall.
Witness the events of 200 years ago that will reveal the history of the game world and your role in it.

Backstory is not the only thing. Do you remember Lumberjack, Beekeeper, Corey and Tress brothers and other silent NPCs? Almost all of them will find a voice and character in this DLC. And this character will be even more crazy than in the original game. In search of mysterious artefacts of antiquity you will learn more about the backstory and relationships of these NPCs. If you convince them to talk.