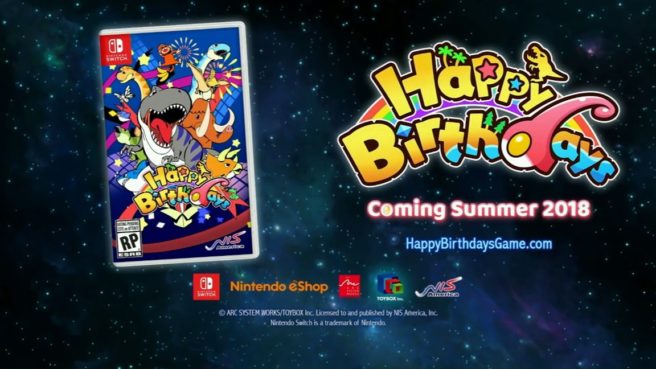 Today, NIS America announced a release date for Happy Birthdays. The game is slated for June 5 in North America, and June 8 in Europe.

Happy Birthdays was previously released on other platforms, but will have UI and game element improvements on Switch. These include:

– Selecting from three premade environments when starting a new scenario, or start completely from scratch with the blank cube
– An all-new skill system: earn “Stars” by sharping the world and capturing lifeforms, then use those stars to drastically interact with the world in different ways.

Happy Birthdays also has all previously-released DLC included. Players can spend accumulated stars to decorate their cubes with a variety of items called “Monuments” which can be unlocked by earning various in-game achievements.

We have more information about Happy Birthdays below.

From the legendary creator Mr. Yasuhiro Wada (TOYBOX Inc.), comes Happy Birthdays: a sandbox game in which players create cube-shaped worlds that give rise to diverse and unique lifeforms. With careful experimentation, players can shape the geography and alter the temperature of each world to create the conditions for life and witness the birth of an entire ecosystem!

Key Features:
– A World All Your Own And On-The-Go! – Create any world you can imagine! From staggering mountains and sprawling forests to a deep sea dotted with islands, there’s no limit to your creations. And now, you can shape your world on-the-go on the Nintendo Switch!
– Life from the Beginning – Discover the history of everything as you foster life of all shapes and sizes –
from single-celled organisms to complex multicellular life, including plants, mammals, dinosaurs, and more!
– Cultivate Your Imagination – Imagine, Experiment, Create! Shape your planet and decide how plant and animal life evolves. No two planets will ever be truly alike.