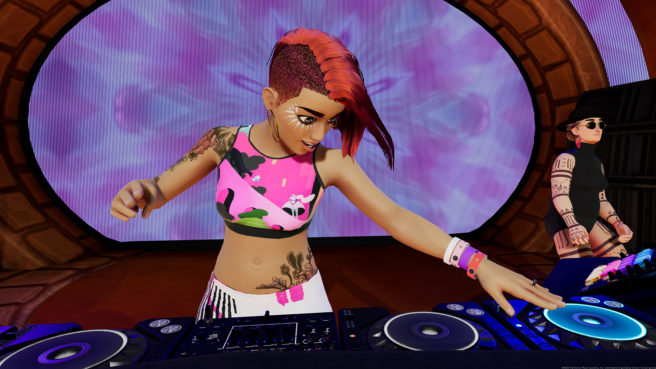 Rock Band and Dance Central developer Harmonix has announced Fuser, a new take on interactive music experiences. It’s planned for release this fall on Switch and other platforms.

Here’s a full rundown of Fuser straight from Haronix:

Today, we are excited to announce a brand-new game from Harmonix and NCSoft – Fuser, a revolutionary step forward for the music game genre. Harmonix has a long history of innovation in the gaming space – establishing a reputation as the premier music gaming studio. Fuser builds on over 20 years of learnings – a testament to the things that have worked so well in games like Rock Band and Dance Central. Fuser also represents a new kind of music gaming experience; a bold reframing of how players can interact with, and develop a new appreciation for, musical content.
At its core, Fuser is a music mixing game that delivers the fantasy of headlining the world’s premier, non-stop music festival. With access to a 100+ song soundtrack that features global hits from some of the world’s biggest artists, players will seamlessly blend vocals, bass lines, beats and riffs as they play. As they’re mixing, players will earn points based on timing as well as their ability to satisfy crowd requests and level objectives.

Core to the innovative gameplay experience is the ability for players to share their unique mixes socially, making their game performances available for watching online with friends and the world.

As players progress through the game, they’ll unlock new songs, new sounds, a wide variety of cosmetic options and also advanced gameplay options that open up a stunning creative palette. Players will be able to express themselves through live challenges, multiplayer modes and also freestyle mode. Fuser is a musical playground where players can explore, discover and perfect incredible mixes. Fuser gameplay is all about creativity and experimentation, an audio canvas waiting for players to make their mark.

We’re inviting everyone to join us for the first hands-on demos with Fuser at PAX East in Boston February 27 – March 1, and at EGX Rezzed in London March 26 – March 28.

From hip-hop to rock, country to pop, the game’s tracklist will include over 100 songs on the disc with additional DLC planned for launch.

The first 16 Artist and Songs will be announced and playable at PAX East and Rezzed:

Fuser is a bold new step into the world of interactive music experiences, and we’re extremely excited to share more details throughout the year leading up to the launch of the game in the Fall of 2020. We have electrifying plans to give players more opportunities to play the game themselves between now and then.

We have the first trailer for Fuser below.