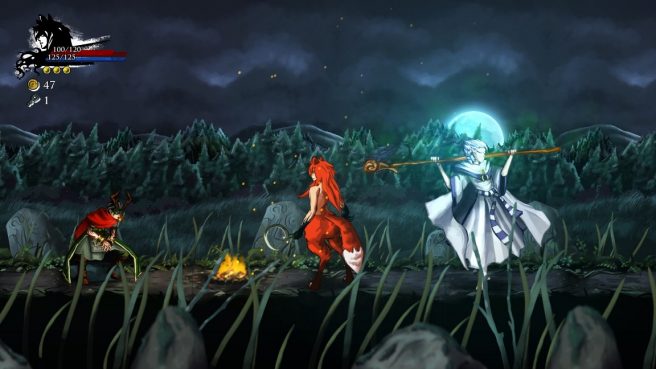 It’s been quite some time since we last posted about Helvetii, an upcoming 2D character-action game. Team Kwakwa has now shared an update.

Helvetii is currently on track for a 2022 launch on Switch. A new trailer has been posted as well, which showcases the three playable characters together for the first time with the addition of the exiled druid, Nammeios. The Helvetii video also gives fans taste of some of the random elements they will encounter in the game.

Character-action set in ancient Swiss Gaul
Around a hundred years BC, all of Gaul is far from Roman control. In the lands controlled by the Helvetii, a Roman legion was subjugated by young warchief Divico, blessed by an ancient boon brought to him from parts unknown.

However, this victory came at a great cost, as soon the result of the war chief’s pact would turn into a curse; an ever spreading rot crawling through his land, and slowly corrupting his mind and heart. Monsters and cultists start appearing throughout the land, and a shadowy figure makes his move, taking advantage of the chaos he helped create.

With the help of the trusted yet reclusive druid Nammeios and the curious half-beast Renart, Divico sets his journey to undo the source of the rot and restore what was lost inside him. Through his own martial prowess and powers conferred by the old gods, the fight ahead promises to be intense.

THREE UNIQUE CHARACTERS
A disgruntled war chief, a snarky fox or a wise druid. Three characters with their unique playstyle and special attacks that will help you dominate the legions of monsters.

Regardless of whatever items or summons you find, you will never be completely helpless in Helvetii. Regardless of power ups, your core moveset will always feel complete from the get-go.
EASY TO LEARN, HARD TO MASTER STYLISH ACTION
With a wide variety of abilities and situations, it’s not just about finishing the fight, but doing it in style!

Take your time to master each character with acrobatic combos, using the terrain at your advantage and mercilessly juggling your opponent for the highest ranks, and highest rewards.

THE GIFTS OF THE GODS AT YOUR COMMAND
Lost treasures, ancient burial mounds, curious owl shopkeepers and altars containing the essence of powerful gods await you, scattered across the land.

Harness powerful summons and obtain items that will give you even more options in a fight.
A PRECISE, VISCERAL EXPERIENCE SET IN A CAREFULLY CRAFTED WORLD
With a closed-in camera, carefully detailed 2D environments and an enchanting soundtrack composed by Dale North and sung by Emi Evans, get thrusted into intense combat scenarios that keep you close to the action

THE SECRETS OF THE GAUL
Discover the ancient Celtic world of the Gauls, mixed in with more unique legends from Swiss and Germanic folklore. Journey from yet untamed forests to abandoned villages overtaken by cultists, merciless snowy caps, underground tunnels and beyond…

We have the new trailer for Helvetii below.

Team Kwakwa will be offering its new game Helvetii through the Switch eShop. You can access the official website here.