Impressions of the final Switch hardware

In many ways, Switch is what I’ve always what I’ve wanted out of a Nintendo console. Back during the N64 era, I dreamed of being able to take a game like The Legend of Zelda: Ocarina of Time or Super Smash Bros. anywhere I wanted. Sure, we did receive Ocarina of Time 3D a few years ago and a portable version of the new Smash Bros. more recently, but what Switch is offering is completely different. Switch provides a new means of moving between your television and a portable screen, and based on my early hands-on time with release hardware, it does so incredibly well.

It really is as simple and easy as people have said. If you have the two Joy-Con connected to the handheld device during a portable session, you just need to remove the controllers (done by pulling them up while holding down a button right underneath the top triggers) and place the main device in the dock to begin playing on your TV. It doesn’t take more than a couple of seconds before the image displays. The transition between removing the Switch from the dock to begin playing on the dedicated screen is even quicker, appearing almost instantaneously.

Starting up Switch for the first time is also very painless. Nintendo will ask you to go through a few simple steps such as selecting a language, region, time zone, and date / time. You’re also asked to make a user profile, which is comprised of your name and icon. The whole process doesn’t take more than a few minutes.

Once you’re finished with the initial setup, you can begin playing to your heart’s content. You can use the system while it’s docked and connected to a television, or portably. Both offer several options. 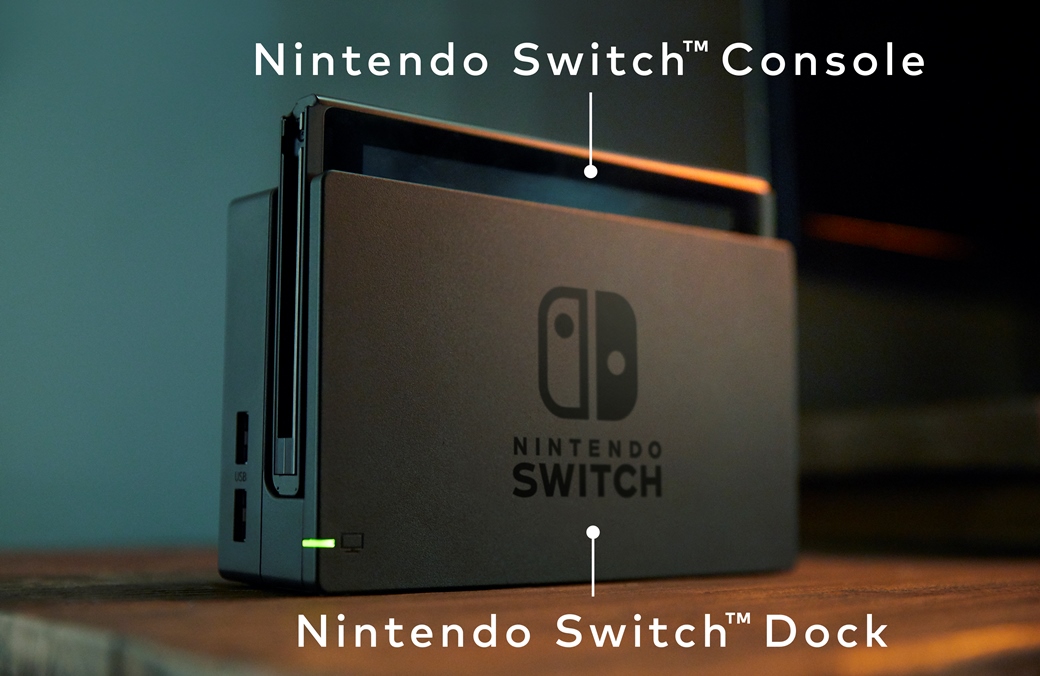 I spent a good chunk of time playing through The Legend of Zelda: Breath of the Wild while the system was docked. Nintendo includes a grip with every system where you can place the Joy-Con in a set position, but I preferred using the controllers detached. Nintendo’s Yoshiaki Koizumi had a bit of a funny moment during the Switch presentation last month when he sprawled himself out on a couch to demonstrate how free the experience can be, but maybe we shouldn’t have laughed – I can see a lot of people preferring to play this way. Remember when you had some space to maneuver back during the Wii days with the Wii Remote and nunchuck? This Switch playstyle is similar, but even better since there isn’t a cord connecting the two Joy-Con.

Switch also has a kickstand in the back so that you can set the handheld on something like a table. I didn’t really feel a need to play that way for something like Breath of the Wild, but it might be better suited for other types of experiences.

The more appealing option when not using a TV is to play Switch portably with the two Joy-Con attached to the sides. It basically becomes something like a 3DS, though much better. For one thing, the screen is significantly sharper – Zelda really does look good here. The fact alone that something such as Breath of the Wild can be played anywhere and everywhere on this device without really losing much – aside from some details that may be tough to make out simply due to the screen being smaller than a TV – is pretty mindblowing. 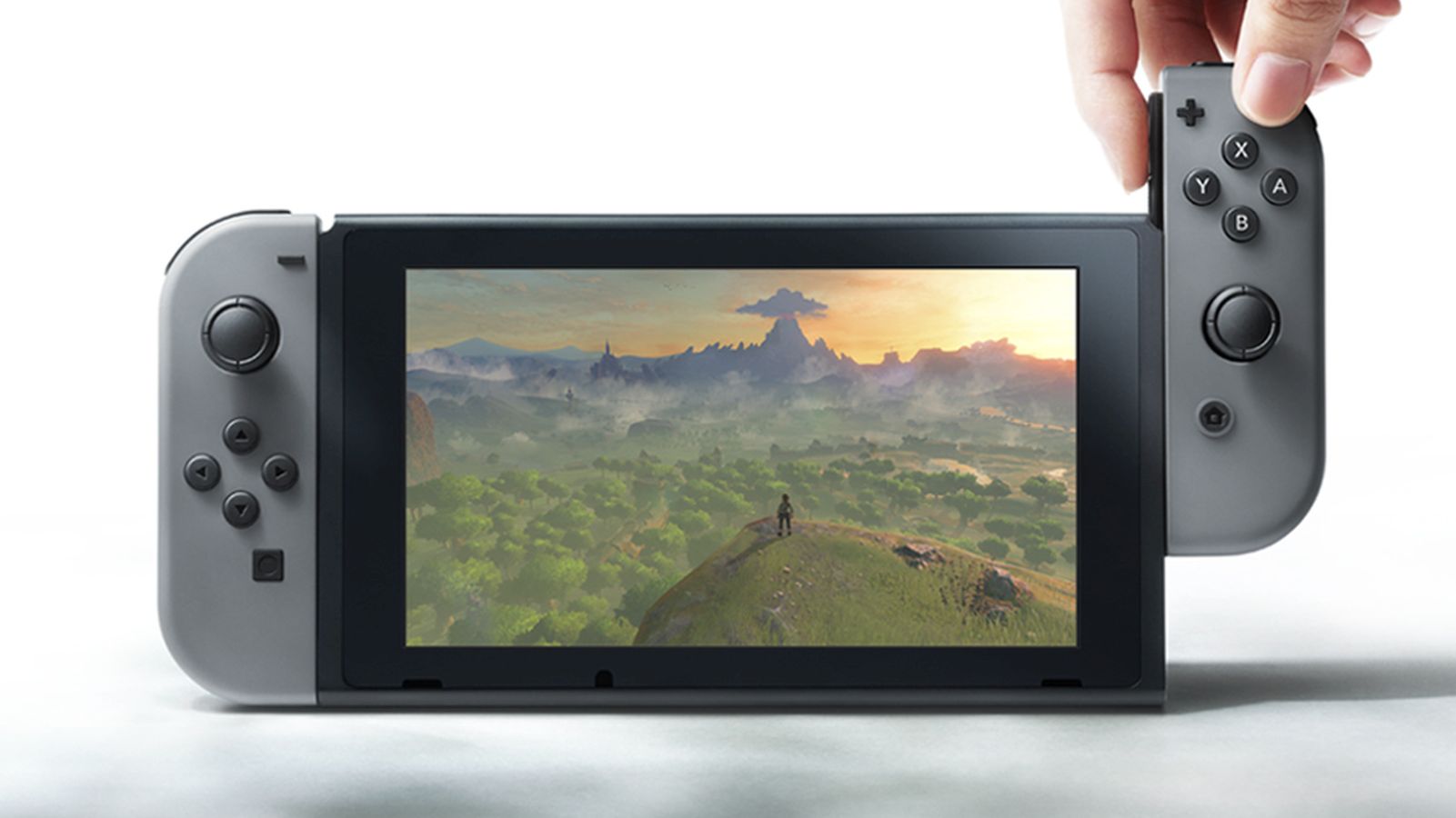 Switch feels good to hold while playing in portable mode. The system isn’t too heavy, so I can see myself playing for quite awhile without getting tired. Actually using the system and pressing all of the buttons also never felt like an issue while playing in handheld form.

When playing games, Switch has a neat little Quick Menu that you can access, available by holding down the Home button. Here you’re able to enter sleep mode (though you can also do so by pressing a physical button on the system), enable/disable auto brightness, change the actual brightness, and enable/disable Airplane Mode. You’ll also be shown the current time and battery life.

Probably the biggest takeaway for me is how smooth and snappy everything feels. Coming off of Wii U, Switch is a massive improvement. It honestly is night and day. Wii U was incredibly sluggish when the system first launched, and while it improved a bit after a few updates, even just returning to the Home Menu after closing a game can take some time. With Switch though, everything is fast. Booting up the system is very quick. The same goes for entering and exiting sleep mode. Starting Zelda is relatively quick, and closing the game happens immediately. You can even access system settings while playing games apparently, as I was able to create a Mii while Zelda was still running.

Everything about Switch just feels right. As silly as it may seem, the various sounds the system makes when scrolling between things, pressing buttons, etc. are nice. Best of all, you’ll hear the satisfying click sound when connecting the Joy-Con to the system – not only through the click of the physical controller, but also via an audio and visual cue from the system itself. 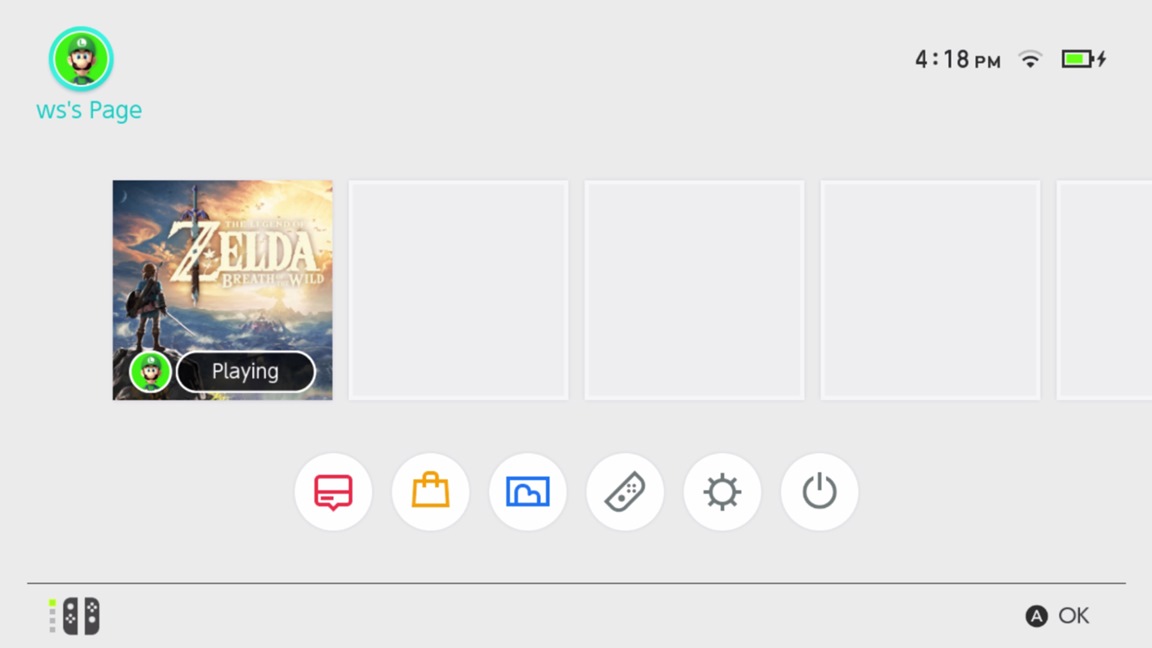 At the time of this preview’s posting, there was still quite a bit that I couldn’t access on Switch. The one big absence is the eShop, which no one has seen yet – not even developers. Friend functionality is also disabled, so you can’t add people you know or access the Friend List just yet. These features and more should be added through an update available at launch with the system.

I have to say that I’m impressed with the time I’ve had with Switch thus far. Nintendo seems to have nailed the core aspects of the system while offering a snappy UI and operating system. Numerous playstyles are available, getting into games is quick, and it’s a painless process when you’re just navigating the menus and settings. Very soon you will be experience what Switch has to offer, as we’re about a week away from the March 3 launch.