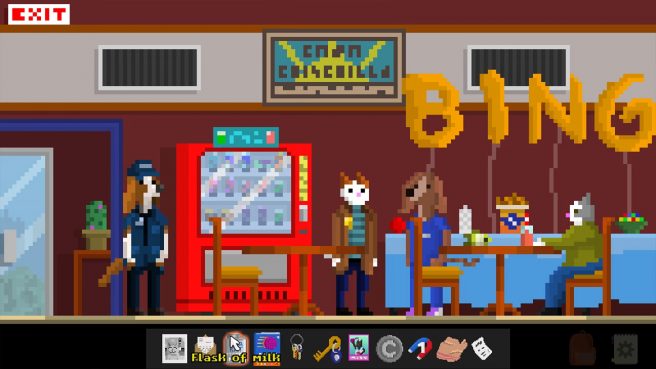 If you’re interested in taking a closer look at Inspector Waffles, that’s now possible thanks to some new gameplay. The detective adventure title released on Switch this week.

Check out the following overview for Inspector Waffles:

Step into the boots of whip-smart Inspector Waffles and travel the city to track hidden clues, interrogate shady suspects, and unravel a mystery. But be warned: curiosity killed the cat…

Inspector Waffles was hoping his worst days were behind him, but the murder of a high-profile industrialist CEO beloved by the citizens of Cat Town raises new questions and fears.

Being the best inspector on the CTPD, Waffles has no choice: he’s gotta push past the painful memories, don his well-worn overcoat, and prepare to get his paws dirty.

A detective story reminiscent of the old school classics, Inspector Waffles provides plenty of peculiar mystery, a story full of intrigue, and a slew of characters to interrogate, all wrapped into beautifully simple pixel-art. Will you be able to sniff out every clue and nab the murderer?

A REAL TREAT, SEE?
* A brilliant feline detective in a world full of anthropomorphic cats, dogs, and maybe other species. It’s pixel-animal madness, I tell ya.
* A beautiful jazzy soundtrack, full of notes and music and harmony pleasing to your ears and brain.
* Chock full of dry humor and puns about cats and dogs. Seriously, I couldn’t think of any more puns to include. The pun supply is exhausted.

The new Inspector Waffles gameplay on Switch can be found below.

If you’re interested in Inspector Waffles, you can pick up the game from the Switch eShop. A physical version is planned from Red Art Games.