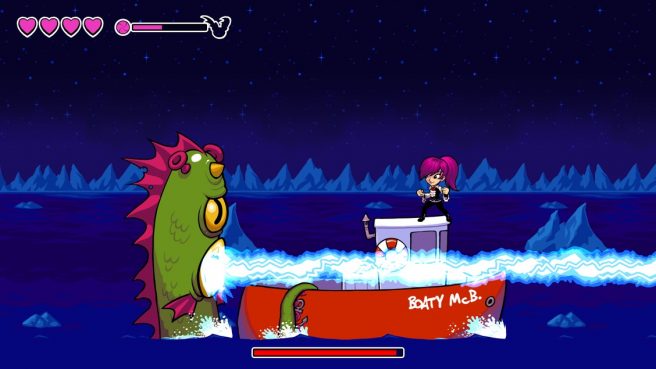 Publisher Ratalaika Games, along with developer the Senile Team, today announced that they’re bringing Intrepid Izzy to Switch next month. Those interested in the title can pick it up on December 2, 2022.

The game is described as “a genre-defying 2D game”. It offers a mixture of platforming, beat ’em up, and adventure elements.

Gameplay is inspired by various games from the 16-bit era that will be apparent to many gamers but Intrepid Izzy has its own originality and branding. Merging together many favourite gameplay elements and challenges, it offers up a colourful feast of action and exploration! Unbelievably as the developer explained, ‘many themes, characters and enemies in the game were inspired by real life events. For example, meeting someone with an allergy to kiwifruit inspired me to design kiwifruit monsters. The various costumes that Izzy collects to gain special powers are also (loosely) based on real-world examples’.

The characters in Intrepid Izzy are animated using custom-made software which took a lot of time and effort to develop, but gamers will note, it was well worth it. Intrepid Izzy contains thousands of frames of animation, which cannot feasibly be created any other way.

Retaining certain characteristics of classic game graphics, evoking a sense of familiarity and/or nostalgia marks this game as a real labour of love.

Besides the above, there are 11 smaller levels which often provide a different gameplay experience, such as a boss fight, a time-limited mission or an introduction to new gameplay mechanics.

Rewards and winning challenges are all part of the experience and most notably, new costumes for Izzy that grant her special powers is high on the priority list. For example, the flying squirrel suit that allows her to glide on air currents. There are also heart fragments to increase Izzy’s maximum health points, maps to help her find stuff, keys that open doors to new areas, coins that she can spend on various upgrades, as well as the arcade games in town, and various quest-related items. So much more is on offer.

Take a look at a trailer for Intrepid Izzy below.

The game will be sold digitally via the eShop. Pricing is set at $10.99.