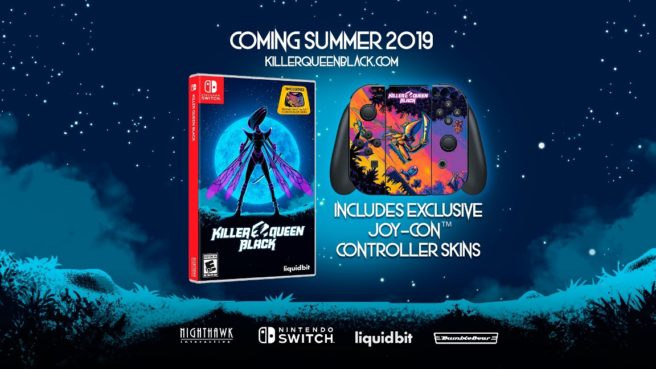 Killer Queen Black will be sold physically on Switch, Liquid Bit and BumbleBear Games have revealed. Nighthawk Interactive will distribute the strategic eight-player arcade action platformer at retail, which was first announced for Switch at last year’s E3. A themed controller skin will be included in the package.

Here’s everything you need to know about Killer Queen Black:

Inspired by the arcade esport phenomenon Killer Queen, Killer Queen Black harkens back to its arcade roots with a Glam Rock-inspired 16-bit pixel art style and rocking ‘80s metal tunes to match. Players battle for the hive online in two teams of four (Gold versus Blue), comprised of one Queen and three Workers, and can face opponents from other platforms with full cross-play across Nintendo Switch, PC, and Xbox One.

Killer Queen Black introduces the new Black team, recognizable by their special, glowing outfits. Any team that faces and triumphs over the Black team dethrones them and takes their place on the stream. These relentless competitions will be constantly streamed online to spotlight skilled gameplay and keep the buzz going around the coveted Black team position.

• Cross-Platform Multiplayer – Fast-paced and reactive multiplayer awaits two teams of four players each to compete across six different maps. Complete cross-platform functionality enables Nintendo Switch, PC and Xbox One players to team up and battle it out as they aspire to ascend the ranks and become the dreaded Black team;

• Three Victory Conditions – A match ends once one team has won three times, and wins can be achieved in three ways. Workers can earn an Economic Victory by collecting berries on the battlefield and bringing them back to their home base. Soldiers and Queens can claim a Military Victory by slaying the opposing team’s Queen three times. And, sometimes slow and steady wins the race with the Snail Victory, which players can earn by slowly riding the snail waiting in the middle of each map back to base;

• Three Game Modes – Quick Matches are ready for those eager to leap into the fray, Ranked for those who want to rise to the top, while Custom games offer a private sandbox for players to invite friends or play with AI.

• Exclusive Controller Skins – Players can flaunt their dedication to becoming the Black team with exclusive themed Nintendo Switch Joy-Con and Xbox Wireless Controller skins, made of top 3M vinyl skin material with precision fit and is easy to apply and remove.

Pricing for Killer Queen Black’s physical version is set at $29.99. You can pre-order the game on Amazon, Best Buy, and GameStop.