Posted on September 7, 2020 by Brian(@NE_Brian) in News, Screenshots, Switch 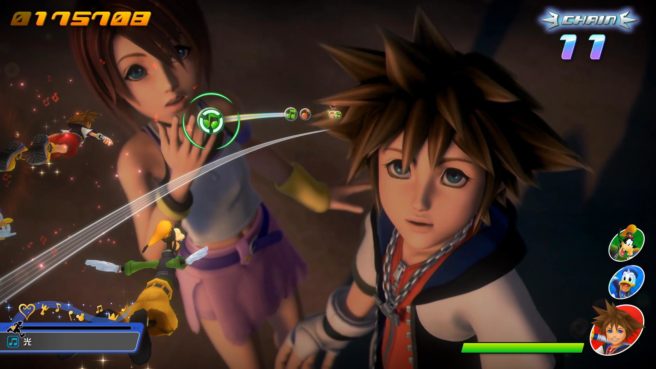 Square Enix has delivered a new batch of details and screenshots for Kingdom Hearts: Melody of Memory. On top of that, we have information pertaining to confirmed songs, Versus Mode version differences, and more.

– A world of memories guided by the power of music
– Visit each world by Gummi Ship and melody
– Collect the “Rhythm” in each world while looking back at memories
– The mysterious power woven by the melody creates memories, and memories become the world and bring back to life the adventures that have occurred thus far

– A large number of characters from the Kingdom Hearts series are playable
– Outside of the “Original” cast, you can switch between parties at any time once unlocked
– Party: Original – Sora, Donald, Goofy
– Party: Days – Roxas, Xion, Axel

– Press the buttons to match the timing of incoming enemies and musical notes
– You will be scored “Excellent,” “Good,” or “Miss” for each button input based on your timing
– If you get a “Miss,” your HP in the lower-right corner of the screen will decrease
– “Game Over” if depleted fully
– “Music Select,” which is one of the game’s main modes, has three control play styles to choose from
– Normal Style: The most basic play style; play with the standard controls that uses several buttons
– One-Button Style: A one-button play style where every action can be performed the same button; recommended for players who want to focus on the rhythm without being distracted by button inputs
– Performer Style: A challenging play style with complicated button inputs that use more buttons than Normal Style; recommended for players who prefer more technical button inputs and pressing the assigned buttons

– Visit the various worlds of Kingdom Hearts memories to obtain new songs and story movies
– Each song offers three difficulties to choose from: Beginner, Standard, and Proud
– Unlocked songs can be played at any time from Music Select
– Story movie can be viewed at any time in the “Museum”

– View Collection cards and story movies, listen to music via the Jukebox, and more

Online Versus and Friend Versus

– “Online Versus”: competitive mode that you can play online with faraway friends
– This mode includes an exclusive element called “Tricks” that allow you to obstruct your opponent, creating heated battles for the high score
– The Switch version has “Friend Versus,” a local correspondence that you can play with nearby friends
– The content is the same as Online Versus
– Trick: Hide Guide – Hides the timing guide on targets
– Trick: HP Change – Switches the player and opponent’s HP

– A Switch-exclusive local correspondence mode where up to eight players can play Field Battle together
– Players who “Miss” a pre-set number of times will be forced to drop out, and the player with the highest score in the end will win

– Play cooperatively with a friend on one screen using two controllers
– One player controls Sora, while the other player controls Riku
– Cooperate with each other and keep in sync while aiming for the high score