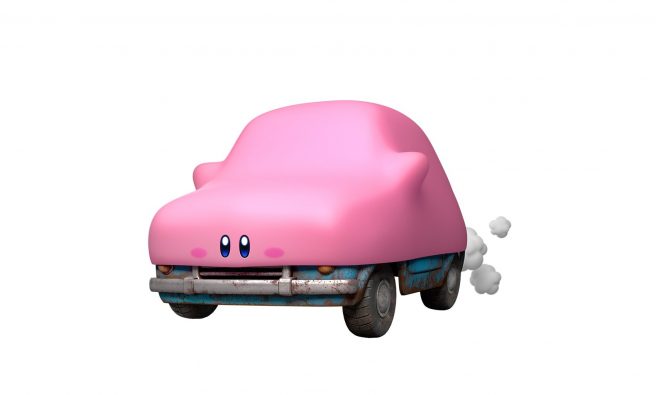 One of the defining gameplay features of Kirby and the Forgotten Land is the new Mouthful Mode. Kirby has always been able to inhale abilities, but this time around he can take on the form of different objects for new types of transformations. The character can turn into a car, a vending machine, and lots more.

In an interview with Washington Post, some of the developers weighed in on the feature. Nintendo’s Kei Ninomiya as well as HAL’s Tatsuya Kamiyama and Yuki Endo had this to say about choosing the Mouthful Mode objects in Kirby and the Forgotten Land:

Ninomiya: It was important to us to make it obvious what Kirby had inhaled just from looking at his transformation. We thought this would be a fun way to highlight how Kirby uses real-world objects in unexpected ways. For example, you can see part of the car peeking out in Car Mouth. In Stairs Mouth, you can’t see the stairs, but you can tell that Kirby inhaled a staircase based on the outline.

Kamiyama: We chose shapes that would be interesting, but we also considered the element of surprise, as well as the possibilities for what Kirby could do with a particular Mouthful Mode. We chose shapes like triangles and squares because they are simple yet drastically different from Kirby’s usual form.

You don’t always know what Kirby can do immediately after inhaling the object, but I think this unexpected nature of Mouthful Mode makes this game even more interesting. There is also versatility in what Kirby can do. For example, Ring Mouth allows Kirby to blow away enemies by exhaling strong gusts of wind, but Kirby can also use the wind to accelerate a boat.

Endo: As Mr. Kamiyama noted, we based our ideas on shapes that will significantly change the appearance of Kirby and are simple for him to transform into, yet still easy to imagine what Kirby can do in that form. We also wanted it to mesh well with Kirby’s moves, so we considered ones that would work well in combination with existing enemies and copy abilities.

For example, Cone Mouth can pierce a hole in the ground, so you can avoid bullets fired by Shotzo and continue on your way.

With Stairs Mouth, if there are stairs blocking the path of a Fuse lit by Fire Kirby, you can inhale the stairs to move them out of the way so the spark doesn’t get extinguished. You can also climb the stairs to reach a Fuse Canon located on a higher platform. (In other words, stairs positioned on top of a fuse would prevent the spark from traveling any further, so by inhaling the stairs, you cannot only move them out of the way, but also put them in a place that allows you to reach a cannon on a higher platform.)

As a result of choosing objects that work well in combination with existing enemies and copy abilities, we were able to enhance much of the existing gameplay.

Over in Japan, Nintendo has been promoting Kirby and the Forgotten Land by selling certain Switch systems with a unique Mouthful Mode box. You can learn more about that here.