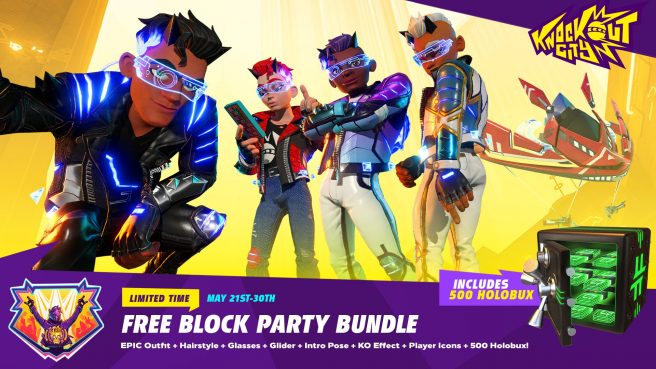 EA and Velan Studios are giving Knockout City another opportunity to try out the game for free. Starting at launch on May 21, the game can be played for free as part of a special trial. Players can access the full “dodgebrawl” experience, including five multiplayer maps, six special balls, five playlists, and cosmetic styles.

Remind your friends to set their alarm clocks for noon UTC on May 21 so the entire Crew is ready the moment Knockout City goes live. Block Party launches alongside the game and will run until May 30 at 12 p.m. (noon) UTC. For the entire length of Block Party, the full game will be free to everyone—no matter which platform you play on—so you can fight for dodgeball dominance as you Crew Up with friends, complete Crew Contracts, and unlock custom gear!

This isn’t some level-capped, red-tape teaser with gated access, either. You’ll have the full game at your disposal—which is good, because you’ll want to try out all the new Contracts, Playlists, and content we’re releasing at launch without worrying about hitting an invisible barrier.

Want to set a reminder for noon UTC in your local time zone?

What does all this mean? Well, for starters, from day one, you’ll be able to Crew Up with friends and unlock bonus content like Epic Crew Cosmetics, up to 500 more Holobux, and Season 1 XP boosts to accelerate your progression when Season 1 starts. Plus, to keep things interesting, we’re releasing four Playlists at launch: Team KO, Diamond Dash, Party Team KO, and Face-Off. You’ll be so immersed in exploring every map, unlocking all that sweet, sweet content, and perfecting your catch on every Special Ball that you won’t even notice you’ve hit Season 1.

If When you decide to purchase during Block Party, you’ll receive bonus content that will stack with the rewards you’ve already unlocked—but don’t wait! This special offer and all the customizations that come with it will disappear when Block Party ends.

Here’s what you’ll get when you purchase the Block Party Bundle: