KonoSuba: God’s Blessing on this Wonderful World! Love for this Tempting Attire – bonus shoot ’em up game gets details and screenshots 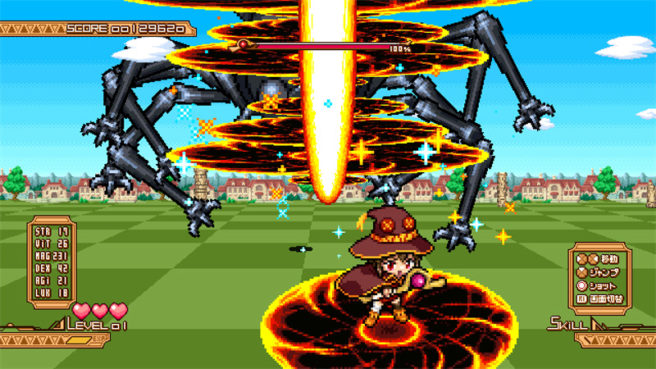 For the upcoming release of KonoSuba: God’s Blessing on this Wonderful World! Love for this Tempting Attire on Switch, a bonus shoot ’em up game will be included with first-print copies. Mages has now provided details and screenshots for the extra title, which is known as Wonderful World! Kazuma’s Jump Out Adventure!, publisher Mages. announced.

– Genre: “pseudo-3D action shoot ’em up”
– Player controls Kazuma, Aqua, Megumin, Darkness, Yunyun, and Chris
– Fight familiar enemies such as cabbage, goblins, and the Mobile Fortress Destroyer
– Characters are voiced by cast members such as Jun Fukushima and Sora Amamiya
– The story develops throughout a total of six stages based on the world setting of season two of the television anime and the KonoSuba movie
– Anaglyph 3D “Stereoscopic Mode” included
– This mode lets players wear red and blue 3D glasses to see Kazuma “jump out” of the screen
– A pair of 3D glasses are included with the limited edition of the game, allowing players to enjoy this mode immediately

KonoSuba: God’s Blessing on this Wonderful World! Love for this Tempting Attire is due out for Switch in Japan on September 24.