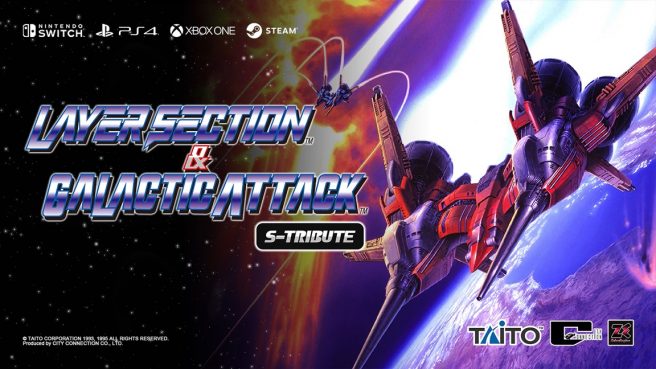 Taito has announced Layer Section & Galactic Attack S-Tribute, an updated version of the classic arcade shoot ’em up originally released in 1995. Switch will be getting it later this month.

Layer Section is the home console version of the arcade game RayForce, which released on SEGA Saturn. Galactic Attack comes into play as that is the overseas version of Layer Section.

New features are planned such as rewind, Slow Mode, online rankings, and more.

Players control X-RAY, a mobile weapon equipped with lock-on lasers and battle against the Con-Human system for the survival of humankind.

You can also play Galactic Attack, the overseas release of Layer Section.

Enjoy the enhanced BGM of the home console game in stereo sound in this title.

The remixed main melodies are tastefully different from their arcade versions!

New useful features like game rewind, slow mode, and quick save have been added.

Compare scores with others in the new online ranking mode!

The game’s main feature, lock-on lasers allow you to attack enemies on the ground or in low orbit.

Use your unit’s cross hairs to lock on to enemies and fire lasers at them in one fell swoop.

Target up to 8 units at once. Destroy multiple enemies together for a higher score.

Destroy 8 enemies at once for a 128x multiplier!

Make full use of lock-on lasers to aim for higher scores!

・Rewind: Rewind gameplay a by certain amount of time and resume.

・Quick Save/Load: Save game state at any point. Up to three slots available.

・Coin Credits: Insert up to 99 credits and play at leisure without worrying about continues.

・Change Difficulty Increase Settings: Play at a constant minimum or maximum difficulty, which increases when certain conditions are met.

・Online Ranking: Switch to online ranking mode in settings to enter your score into the online leaderboards and check how you compare with others.

Reprints of classics produced and developed by City Connection with the Zebra Engine during the Saturn era.

Play a variety of titles with improved controls and new features.

A trailer for Layer Section & Galactic Attack S-Tribute can be found below.

Layer Section & Galactic Attack S-Tribute will launch for Switch on April 28, 2022 via the eShop. Access the official site here.