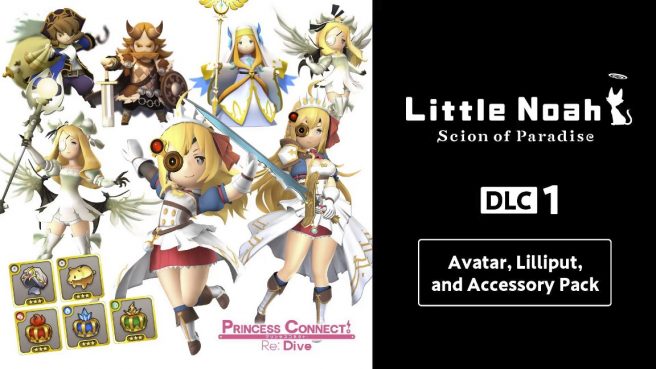 Cygames has released the first major DLC for Little Noah: Scion of Paradise (known as the Avatar, Lilliput, and Accessory Pack) as well as a free update for the game.

Avatars
Talk to the Champion on the airship with the “Avatars” speech bubble over her head to change to one of these new avatars.
1. Gourmet Guild Princess Noah
2. White Mage Noah

Lilliputs
These Lilliputs appear at random in the ruins. Enlist their aid and expand your repertoire!
1. Halvor (★★★)
2. Pirate King Kidd (★★★)
3. Goddess Amelie (★★★)

5. Trusty Piggy Bank (★★★)
Regalia: Deal added damage when you fulfill certain conditions.
Master Merchant’s Turban: Get a discount on items in the Shop.
Trusty Piggy Bank: Keep the gold you pick up in the dungeons, even after getting knocked out.
Use these items wisely to make the most out of each expedition!

The 1.01 update for Little Noah: Scion of Paradise has its own set of content, including the “Hell Mode” difficulty and new types of rooms to the ruins. Read the full patch notes below.

Content
– Added the extremely difficult “HELL Mode”
– Added new types of rooms to the ruins!
The Grand Treasure Vault
Elemental Monster Lairs
Trey’s Bonus Stages
– New Lilliput: Ace
– The store now has an extra item slot to choose from!
Note: If players are already inside a shop when they update, the extra slot will be sold out.
– Low and High settings have been added as Anti-aliasing options.

Bug Fixes
– Fixed the “Battlesword Noah” Avatar title.
– When a Monster Lair is completed, its icon will disappear from the map.
– Fixed an issue when enemies quickly changed directions repeatedly.
– Fixed a bug where the difficulty change would not be saved if players returned to the Title Screen immediately after changing difficulty level.
– Fixed a bug where selecting default settings would instead reset it to your last used settings.
– Adjusted Noah’s graphics when near / interacting with the Potion Cache.
– Fixed a bug where the SFX would not play when releasing the event skip button just before the event is skipped.
– Adjusted the Lilliput House icon on the Airship.
– Smoothed out cursor movement.
– Adjusted max-ranked support design.
– Fixed background flickering.
– Fixed some phrasing during events.
– Fixed tutorial messages.
– Fixed some map collision points.

The Avatar, Lilliput, and Accessory DLC Pack and 1.01 update for Little Noah: Scion of Paradise DLC are available now.