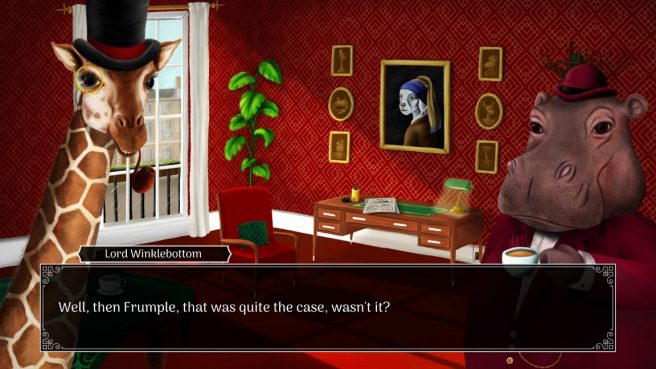 Cave Monsters has announced a release date for Lord Winklebottom Investigates, its 1920s-inspired point-and-click adventure title. Switch will be receiving the game on July 28, 2022.

Lord Winklebottom Investigates was originally funded on Kickstarter in 2019.

Inspired by British literature icons such as Agatha Christie and Sherlock Holmes, Lord Winklebottom and his tea-drinking hippo companion Dr. Frumple will enjoy a journey full of intrigue and secrets that will keep mystery fans gripped. This is a game with plenty of heart, featuring a script and setting full of bizarre characters and humour that wouldn’t be out of place in a Monty Python or Blackadder sketch.

Players who are behooved to crack the case will do so by solving puzzles and interrogating a variety of animal NPCs. Including grog-loving seagulls, a bleating goat as a maid, and a puffin in a fetching yellow sou’wester, each 2D character has unique, hand-painted artwork. Point and click your way through the game and seek justice for your fallen friend!