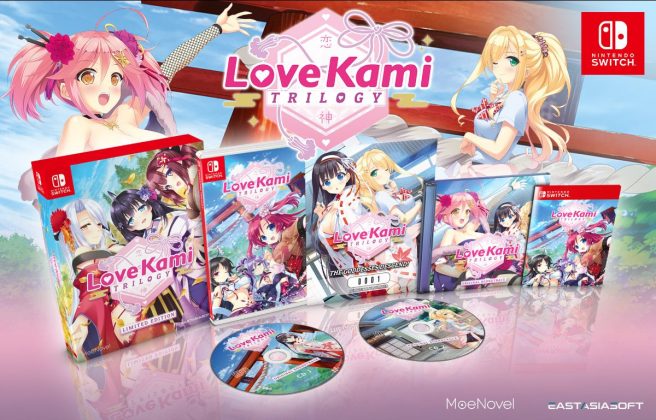 Eastasiasoft and Pulltop today unveiled LoveKami Trilogy, a physical collection for Switch featuring Divinity Stage, Useless Goddess, and Healing Harem. It will be made available in 2022.

Play-Asia will have the exclusive on this. On November 18, fans will be able to place a pre-order for either a standard copy priced at $39.99 or a limited edition for $49.99. Only 2,000 units of the limited edition will be made.

When countless goddesses suddenly appear in Japan wishing to learn more about the human world, a Divine Education Act is passed to restore order. Now one year later, the subculture holy land and heart of Divine Idol culture known as Akihabara houses the seven lucky goddesses who dominated as idols in L☆SEVEN. A glamorous and splendid contest is being held for auditions, containing everything that goddess’ dreams are made of. The stage is set for an unforgettable saga of voluptuous proportions!

Laugh, grow, and even cry with the goddesses who descended from the sky and are aiming to become top level idols in LoveKami: Divinity Stage, then help rehabilitate those naughty deities who refuse to follow the rules in the next story arc, LoveKami: Useless Goddess! Finally, follow the narrative six years after the goddess’ descent in LoveKami: Healing Harem, a captivating tale set in a quiet mountain shrine where cursed goddesses hope to find love and perhaps marry the man who helps solve their troubles!

LoveKami Trilogy brings every chapter of the alluring series together into one definitive experience! Each game presents a beautifully illustrated visual novel adventure with multiple character routes. Which of their divine hearts will you be open to you?