Luckydog1 announced for Switch, releasing in January 2022 in Japan 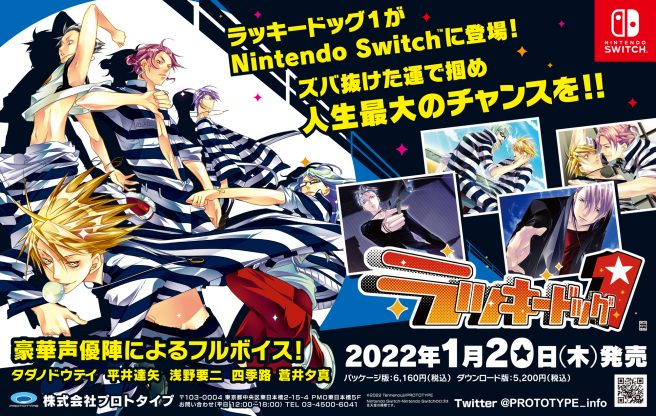 The otome visual novel Luckydog1 is coming to the Switch on January 20, 2021. This game is published by Prototype Ltd. and developed by Tennenouji, and it will be priced at 5,200 yen on the Japanese eShop (it’s also getting a physical release for 6,160 yen).

This game first released in 2009 for PC but has been ported to multiple systems since then. The publisher MangaGamer is planning an English release for PC in the future, so it’s possible that the Switch might see this English release as well at some point.

For more information on Luckydog1, feel free to check out the trailer and overview of the game below.


Synopsis
It all starts with the slam of a prison door. Four captains from the same Mafia family, the CR:5, are taken out in one fell swoop and left to rot behind bars.

Lucky for them, our hero’s already there.

Gian’s just a run-of-the-mill wiseguy, passing his time doing petty jobs for the family when he’s on the outside and living the lazy life when he’s in the slammer. But those easy days come to an end when he gets word from the boss: if he can break the captains out, Gian will earn a spot at the top of the hierarchy.

Can he pull off a job this big, or is it more than even Gian’s fabled good luck can manage?