Mary Skelter 2 launches for Switch in the west in October 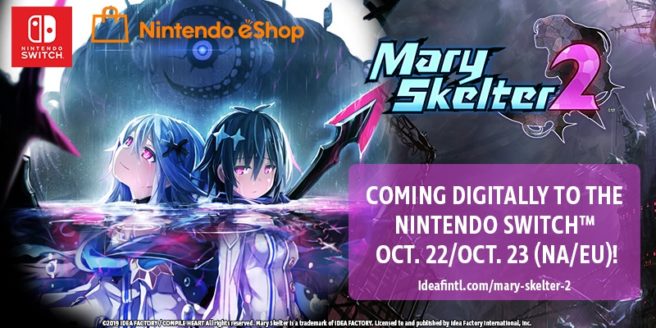 Mary Skelter 2 will be coming in October, Idea Factory announced today. The first-person dungeon RPG will be sold on October 22 in North America and October 23 in Europe.

If you’re interested in Mary Skelter 2, you’ll be able to purchase the game from the eShop. A physical version isn’t planned for the west.

Here’s an overview of Mary Skelter 2, which also includes the first installment of the series, Mary Skelter: Nightmares:

Mary Skelter 2 evolves the core elements in Mary Skelter: Nightmares to bring to you a world teeming with twists and turns, topped with a new battle feature where the previous protagonist, Jack, is now a Nightmare. Players can use his Nightmare powers to defeat enemies, but at a maddening cost. Set in an alternate reality that includes familiar characters from the first installment, players must relive the torturous dungeon experiences and find ways to feed an almost insatiable prison. Will you be able to escape this prison and find sanctuary or will you fall into the clutches of madness?

Jack is a Dull Boy – Jack, the protagonist from Mary Skelter: Nightmares, has now turned into Nightmare Jack. He can still help you along the way, but be wary of his heart rate meter! Once his heart rate reaches a certain limit, he will turn into Ripper Jack, causing him to go berserk. When in Ripper Jack mode, Otsuu also risks going into Blood Skelter mode, which will cause her to go berserk too! With first game, Mary Skelter: Nightmares included, you can play through an alternate world where Jack is the main protagonist.

Build Your Own Blood Maiden – When leveling Blood Maidens, players can use CP points to level up skills and learn new ones. Surprise enemies by teaching party members to learn from 5 different jobs beyond their specialties, which can alter a Blood Maidens’ abilities, the gear they can equip, and even their appearance. Mix-and-match skills based on your playing style!

Farm for Blood, Reap the Benefits – Use Blood Crystals to plant Blood Flowers, which can be harvested for additional items. Splash Blood Flowers with Marchen blood for an increased chance of getting rarer items when harvested. There are no two same items, so remember to keep harvesting and reap all the benefits!