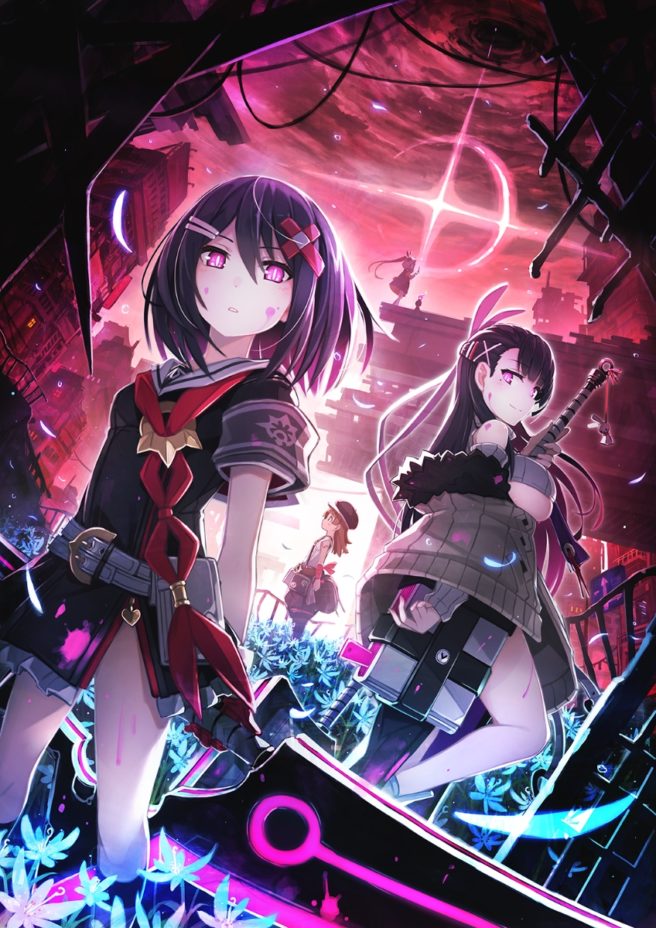 – The Jail: a living prison that feeds on the humans trapped within its confines
– The Jail appeared a number of years ago with the caving of the city around it
– Now twisted creatures known as Marchens and treacherous Nightmares roam its halls
– The Blood Maidens, reincarnations of old stories and folk tales led by Jack, successfully escaped the Jail and managed to make it from the underground prison to the surface
– Although they had hope for the surface, the scene Jack and company first saw when they emerged… was thousands of dead bodies submerged in a sea of blood, and the maniacal laughter of “Genocide Pink” (executioner girls)
– Scattered by the overwhelming slaughter and mayhem of Genocide Pink, their only ray of hope was seemingly destroyed
– Scorched Pillar, a member of Genocide Pink born to kill humans
– Jack, a Blood Youth who would give even a drop of a blood to save a friend; Mary, a match girl who plays the light of the meaning of life; Zyu, a mysterious boy who calls himself “Tower Base”; Red Riding Hood, a Blood Maiden distressed about her father; and Clara, a regular old nobody
– Everything leads to the “Foul Feeding Overseer Tower” that floats high in the sky
– This is the finale of the prison break drama of the girls who follow the lights of hatred and friendship in attempt to escape the tiny earth star

– A boy who was living as an inmate in the Jail with Alice
– One of the six protagonists
– His encounter with the Blood Maidens led him to discover that he is the only living Blood Youth, and he fought alongside them as companions
– Timid, but successfully escaped from the Jail twice over, remaining calm despite the circumstances
– Grew into a strong and kind soul who is willing to put his life on the line for his friends
– After everyone is scattered by the onslaught of the Execution Girls, he goes along with Otsu and Little Mermaid

– One of the six protagonists
– Has always lived in the same Liberated District as Jack and Alice, but has been living alone and without recognition all this time due to her lack of presence
– She likes and accepts this loneliness, and lives a surprisingly positive life, grinning as she strikes matches to see visions
– Only to Charlotte, the one person to notice her and give her a name, does she act both cynical and affectionate
– After everyone is scattered by the onslaught of the Execution Girls, she goes along with Charlotte and Alice

– Mysterious woman who was living in the same Liberated District as Mary and Jack
– Knows about Jack and the Blood Maidens, as well as the secrets and truths that were only known to them
– Knew she was a Blood Maiden, but would rather lie low with Mary in the Liberated District rather than join Dawn
– After everyone is scattered by the onslaught of the Execution Girls, she goes along with Mary and Alice

– A girl who was the assistant of a weapons craftsman in the underground Liberated District
– One of the six protagonists
– Bright and outgoing
– Well-liked by others, but can be a bit annoying
– She is just an ordinary girl without the power the fight, but thinks and acts with utmost effort to pave the way forward
– After everyone is scattered by the onslaught of the Execution Girls, she goes along with Hameln and Gretel

– Amnesiac boy completely shrouded in mystery
– One of the six protagonists
– Calm and rational
– Can also be ruthless if it is to achieve his goal
– Acts relying only on fragments of memories, such as “I have to find my dear wife,” and “I’m the Tower Base and Blood Youth”
– After everyone is scattered by the onslaught of the Execution Girls, he meets and goes along with Snow White and Kaguya

– One of the six protagonists
– An impulsive girl who acts before she thinks
– Since she was the first Blood Maiden, she assembled the girls as their big sister
– The fact that her true father ended up being the man behind the scenes of the Jail cast a dark shadow upon her mind
– Usually cheerful, but lacks confidence in herself at heart
– After everyone is scattered by the onslaught of the Execution Girls, she barely manages to link up with Thumbelina and Cinderella