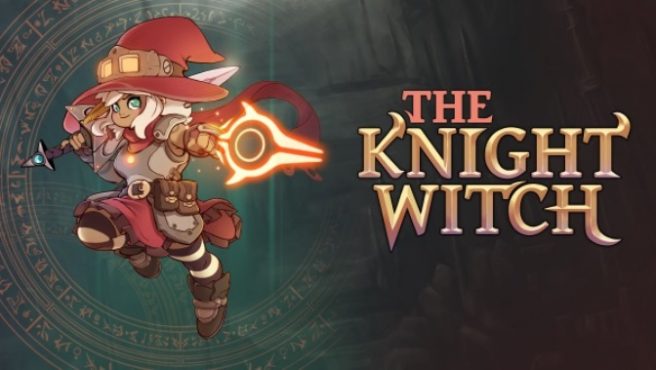 Team17 and Super Awesome Hyper Dimensional Mega Team – otherwise known as Super Mega Team – have announced that they’re teaming up on The Knight Witch, a Metroidvania game. The title is slated for a 2022 release on Switch.

The Knight Witch offers a mix of fast-paced shoot ’em up combat with Metroidvania traversal and exploration alongside a magic deckbuilding system. The game’s premise is that a mysterious threat and their army of war golems have overtaken a once peaceful metropolis, and it’s up to Rayne to use her powers to fight back and save those she loves.

With over 30 unique spell cards to choose from in a magic deck-building system, and Knight abilities to upgrade and improve, players can customize Rayne’s build to fit their playstyle, taking down the invading golems in the most effective way. Like other Knight Witches, Rayne thrives off the love and adoration of Dungeonidas’ citizens, growing ever stronger with their continued support – players can choose to capitalize on this, lying to the adoring denizens for their own means, or they can be honest, sharing the painful truth to the masses.

– Shoot ‘Em Up Spellcasting Sorcery: Encounter evil foes and choose whether to wield Rayne’s magic or use her weapons and wits to take them down.
– Body and Mind: The Knight Witch Duality: Customize Rayne’s unique playstyle, upgrading Knight abilities for a more fast-paced shoot ‘em up experience, or strengthen Witch magic and explore different deckbuilding strategies with over 30 unique spell cards to choose from.
– Build Trust & Make Lasting Bonds: Knight Witches become stronger with gratitude and trust and can earn it in many ways, not all of which are sincere – the choice to choose popularity over honesty lies in the players hands.
– Forward-Thinking Accessibility: The Knight Witch has been designed as a Metroidvania without barriers; with an intuitive on/off ‘auto-aim’ system, world-altering ‘cheats’ and a focused main story navigation system – players will never get lost and can tailor the game to their level of play.
– Super Mega Team: The Knight Witch is brought to you by a veteran team of developers behind titles such as RiME, Moonlighter, and Plants VS Zombies.

Find the first trailer for the game below.

The Knight Witch will debut digitally on Switch via the eShop.