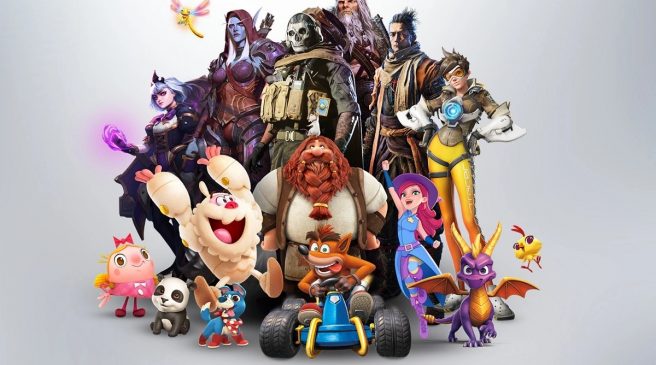 Microsoft is nearing a deal to purchase Activision Blizzard, according to an official announcement and major outlets including The Wall Street Journal and Bloomberg.

Activision Blizzard has faced significant controversy over the past few months concerning sexual harassment, general misconduct, and other issues at the workplace. As for gaming specifically, the company holds some major games and IPs with the likes of Diablo, Overwatch, Tony Hawk’s Pro Skater, Crash Bandicoot, and Spyro. Many of these franchises have already appeared on Switch. Overwatch 2 had also been announced for the platform previously.

The official announcement for Microsoft’s acquisition of Blizzard can be found below.

With three billion people actively playing games today and fueled by a new generation steeped in the joys of interactive entertainment, gaming is now the largest and fastest-growing form of entertainment. Today, Microsoft Corp. announced plans to acquire Activision Blizzard Inc., a leader in game development and interactive entertainment content publisher. This acquisition will accelerate the growth in Microsoft’s gaming business across mobile, PC, console and cloud and will provide building blocks for the metaverse.

When the transaction closes, Microsoft will become the world’s third-largest gaming company by revenue, behind Tencent and Sony. The planned acquisition includes iconic franchises from the Activision, Blizzard and King studios like “Warcraft,” “Diablo,” “Overwatch,” “Call of Duty” and “Candy Crush,” in addition to global eSports activities through Major League Gaming. The company has studios around the word with nearly 10,000 employees.

“Gaming is the most dynamic and exciting category in entertainment across all platforms today and will play a key role in the development of metaverse platforms,” said Satya Nadella, chairman and CEO, Microsoft. “We’re investing deeply in world-class content, community and the cloud to usher in a new era of gaming that puts players and creators first and makes gaming safe, inclusive and accessible to all.”

As a team, we are on a mission to extend the joy and community of gaming to everyone on the planet. We all know that gaming is the most vibrant and dynamic form of entertainment worldwide and we’ve experienced the power of social connection and friendship that gaming makes possible.

As we pursue that mission, it is incredibly exciting to announce that Microsoft has agreed to acquire Activision Blizzard.

Over many decades, the studios and teams that make up Activision Blizzard have earned vast wellsprings of joy and respect from billions of people all over the world. We are incredibly excited to have the chance to work with the amazing, talented, dedicated people across Activision Publishing, Blizzard Entertainment, Beenox, Demonware, Digital Legends, High Moon Studios, Infinity Ward, King, Major League Gaming, Radical Entertainment, Raven Software, Sledgehammer Games, Toys for Bob, Treyarch and every team across Activision Blizzard.

The fantastic franchises across Activision Blizzard will also accelerate our plans for Cloud Gaming, allowing more people in more places around the world to participate in the Xbox community using phones, tablets, laptops and other devices you already own. Activision Blizzard games are enjoyed on a variety of platforms and we plan to continue to support those communities moving forward.

As a company, Microsoft is committed to our journey for inclusion in every aspect of gaming, among both employees and players. We deeply value individual studio cultures. We also believe that creative success and autonomy go hand-in-hand with treating every person with dignity and respect. We hold all teams, and all leaders, to this commitment. We’re looking forward to extending our culture of proactive inclusion to the great teams across Activision Blizzard.

Around the world, there is no more exciting venue for fun and connection than video games. And there has never been a better time to play than right now. As we extend the joy and community of gaming to everyone, we look forward to welcoming all of our friends at Activision Blizzard to Microsoft Gaming.

We’re hearing that the Microsoft deal with Activision Blizzard is valued at nearly $70 billion.