Posted on June 27, 2021 by Nicholas Serpa in Reviews, Switch 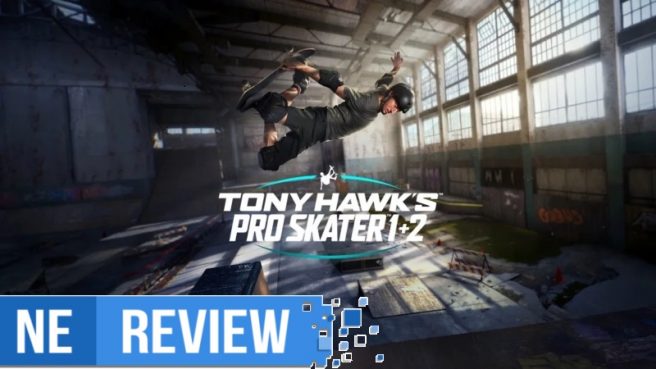 There’s a very specific vibe that permeates every second of Tony Hawk’s Pro Skater 1 + 2, out now on Nintendo Switch. I’d like to think it’s more than nostalgia – although I would be lying if early 2000’s skateboarding games didn’t hold a special place in my heart – but there’s just something romantic about grinding down a staircase at a California skatepark while Rage Against the Machine’s “Guerilla Warfare” blasts in the background. Having barely touched a skateboarding game since Tony Hawk’s Underground 2 on the GameCube, I was excited to see how this ground-up remake of two of the series’ highest-rated games would hold up on a handheld.

Overall, this is an excellent port of the 2020 PlayStation and Xbox versions of Tony Hawk’s Pro Skater 1 + 2. In motion, it looks and feels great – skating and pulling off tricks always feels smooth and responsive, and the frame rate rarely stuttered beyond a few moments when I felt like I was really pushing the onscreen action (ollying off a tall building, for example). I was actually surprised at how good handheld play felt, in particular. Because the analog sticks on the Joy-Con controllers are smaller than those on other consoles, performing even small movements with your thumbs results in very responsive execution of tricks and turns. It’s a great fit for this particular type of skateboarding game, in which the emphasis is less on simulating the nuances of the sport, but rather enabling the player to pull of insane trick combinations and stunts that would put most average athletes in the hospital. 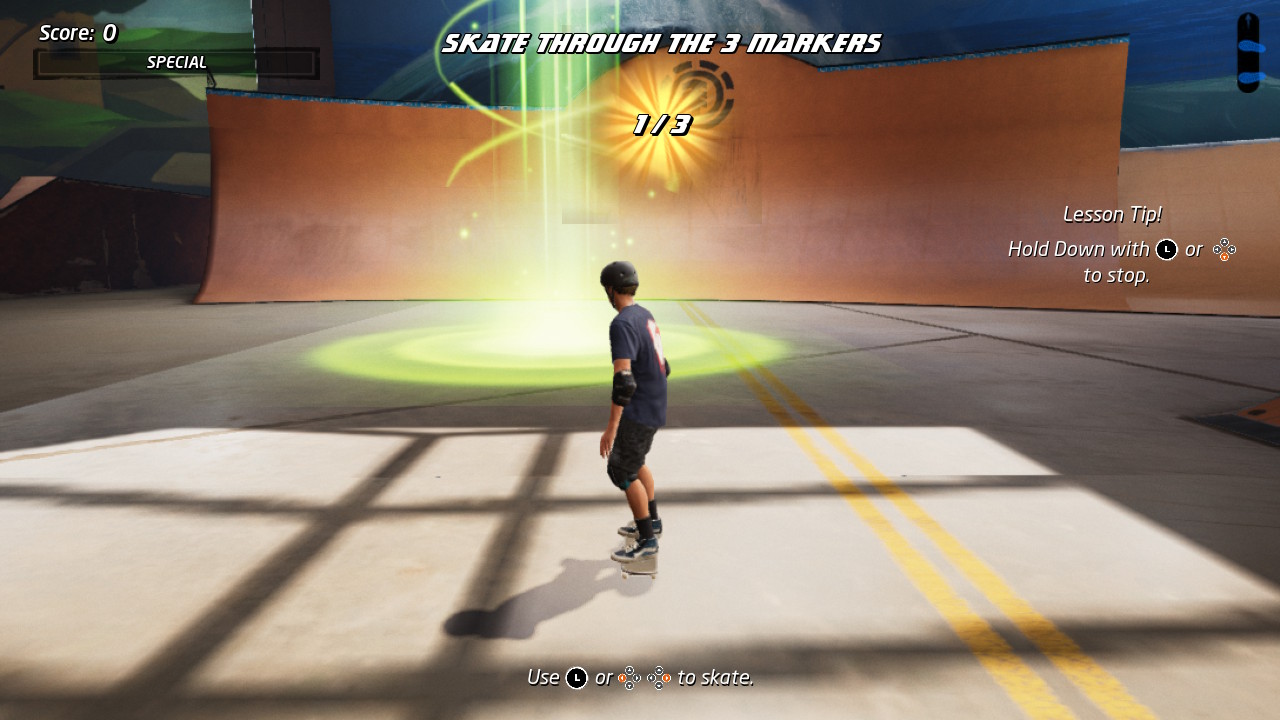 Tony Hawk’s Pro Skater 1 + 2 definitely is not as visually crisp or detailed on the Switch as it is on other home consoles, but I never really felt like my experience was compromised or any less fun because of it. The area where I noticed the biggest drop in detail was actually the character models of the skaters themselves. You are never really looking at them too closely, but there are a lot of jagged edges and blurry textures for clothes and hair that do detract from the quality of the models. The reason it didn’t bother me very much, however, was because more often than not I was focused on the in-game environments, making split-second deciscions about where my next trick would take me in the environment, or where I wanted to explore next. I think the developers realized this, because most aspects of the in-game environments look great on the Switch. Lighting casts realistic shadows on the environment, and pools of water shimmer realistically on the concrete. And while there are a handful of lower quality objects here and there, most of what counts is rendered at a quality that I would say is more than acceptable.

That was a huge relief for me, because part of the big appeal of having a skateboarding game like this on the Switch is being able to take such a diverse selection of content with you on the go. This remake includes a ton of content, the big highlight for me being the huge variety of destinations to skate in. From the beaches and college campuses of California to the dense city blocks of New York and Minneapolis, Tony Hawk’s Pro Skater 1 + 2 includes just about 20 environments to skate in. Not all of them are winners, but there’s something here for everyone, ranging from open urban environments to tight, focused downhill courses. There are also a large range of skaters to choose from, all of whom have different special tricks to unlock and pull off. You can also choose to create your own skater to use across both games, with plenty of room for customization – although again, the lower quality of the character models makes this a bit harder to care about. 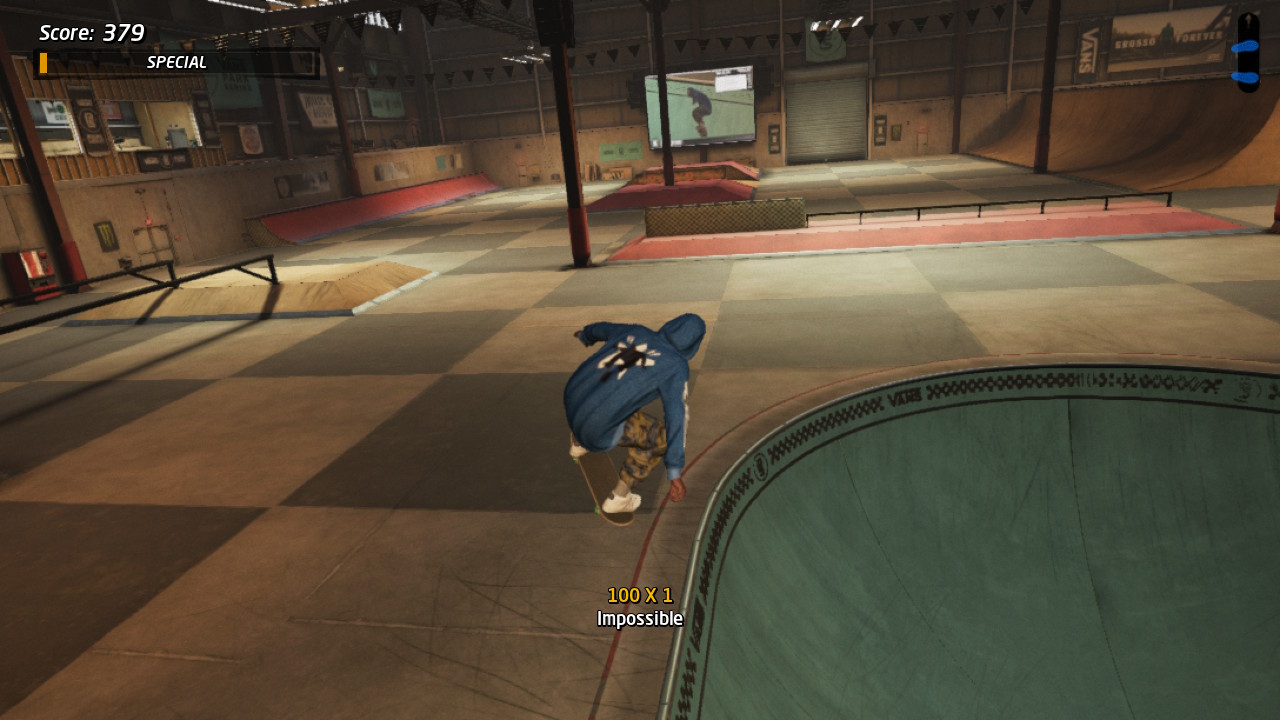 Most of my playtime was actually spent in the free skate mode, which lets you drop into any course in the game with any skater and just go wild for as long as you like. Most people will probably prefer to jump into the classic campaigns first, though – these are the modes that give you two minutes to make your way around a level as quickly and stylishly as possible as you complete various objectives. SKATE letters and tons of other collectibles will be scattered in hard-to-reach places, and it’s up to you to collect as many as possible within the time limit. You’ll also be asked to achieve certain score combos and pull off certain special tricks. Finish enough of the challenges in a level to unlock the next one, and so on. Personally, I don’t come to these types of games to feel rushed through a level – I’m all about getting into that flow state, where I can either focus on challenging myself at my own pace or simply around and enjoy the soundtrack. So, I appreciated that I was able to sidestep the traditional means of progression and just drop into whatever level I wanted.

There’s a lot of replayability already baked into the core game as it is, so I was thrilled to see that Vicarious Visons had managed to bring over the Create-a-Park feature to the Switch version, which really just opens the gates to what feels like an infinite amount of content. I’m not much of a park builder myself, but I love knowing that I’ll have access to a wide range of new courses any time I want something different.

Tony Hawk’s Pro Skater 1 + 2 on the Switch is a faithful port of last year’s remakes that released on other consoles, and barring some technical compromises here and there, everything that matters is present in this version. Filled to the brim with fun places to skate, a killer soundtrack and a variety of skaters, there’s no shortage of skateboarding content here, and being able to take it on the go is a great match for the game’s pick-up-and-play nature. The frame rate is smooth, the action is twitchy and snappy, and it’s generally a solid port of a great game all the way through. You’d be hard pressed to find a better skateboarding game on modern consoles, and so this is an easy recommendation for anyone looking to escape to a world where all that matters is you and your board.