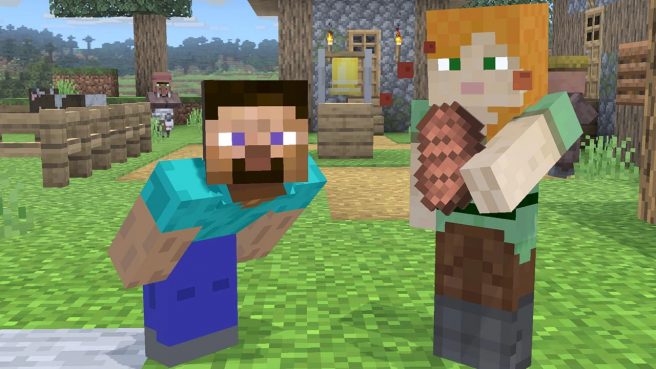 Just a short while ago, it was revealed that Minecraft will be appearing in Super Smash Bros. Ultimate with new DLC. Steve, Alex, Zombie, and Enderman will all be represented.

Following the news, Minecraft developer Mojang Studios published a blog post pertaining to the announcement. Read it in full below.

Is there a doctor in the house? I think I’m about to faint. It all started when I found this weird, white envelope lying at the front door of Mojang Studios, sealed with some kind of red wax stamp – and even weirder – addressed “To Alex and Steve”. Who could possibly want to reach out to our only most iconic duo by snail mail? Did the email end up in the spam folder? My curiosity knew no bounds. Of course, I did what any responsible employee would do: left it where I found it, walked away, returned two seconds later, and opened the letter.

Dear Minecraft players, you have no idea what we’ve all been invited to…

Is this really happening? Do your eyes play tricks on you? After pinching myself about 74 times, I can safely confirm that it hurt. This is neither a dream, nor an extremely belated April Fools’ joke – Minecraft will be joining the cast of the critically acclaimed Super Smash Bros. Ultimate for the Nintendo Switch. In an upcoming Challenger Pack, Alex and Steve – along with other fellow mobs such as the Enderman and the zombie – will duke it out in a blocky brawl with Mario, Kirby, and many other characters from the game worlds you know and love.

As most of us here at Mojang Studios are busy screaming our lungs out in pure joy, our Chief Creative Officer, Jens ‘Jeb’ Bergström offered a few words on this surreal, yet magical milestone.

“Bringing Minecraft to Super Smash Bros. Ultimate is the result of an amazing collaboration with Nintendo” said Jeb. “As fans of the series and avid players at our studios, we couldn’t be more excited to see Minecraft join Smash’s already legendary lineup of characters.”

By now you must have so many questions: When is the DLC coming out? How effective is Mario at smashing Minecraft blocks? What does Steve taste like according to Kirby? And who does Jeb main? You’ll be happy to know that all your questions will be answered very soon. All you need to do is tune in to “Mr. Sakurai Presents Steve and Alex” this Saturday at 7:30 AM PT / 10:30 AM ET / 4:30 PM CET, followed by Minecraft Live, our live celebration of everything Minecraft, at 8:30 AM PT / 11:30 AM ET / 5:30 PM CET. That’s in just two days, and you don’t want to miss it.

Now, please excuse me. I have to go seal this letter before someone finds out I read it.