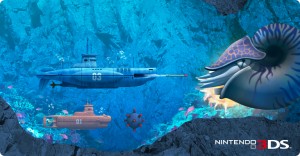 Miyamoto: You’re right that the development time was very long, but its initial planning started off even long before the Nintendo DS demo-version was made. In short, I always wanted to make a flight-simulation game.

Miyamoto: I think one of the biggest charms of an action game is the ability to move the characters intuitively. Flight-simulation games, on the other hand, are fun because the game play is very logical. The fun is in simulating things moving around in your head.

Iwata: But that’s from your perspective as a player.

Miyamoto: Yes. I have an interest in both of them. They’re both enjoyable in their own right. Let’s compare it to F1 racing. One style of racing games is where it can make you feel like you can drive, turn and stop just like a professional racing driver. The other is that, by mastering the game, you can actually come closer to be a racing driver. Out of the two, this one is much tougher. Normally, people don’t like difficult things as a form of entertainment, but it has its charms because of that difficulty.

Miyamoto: That’s why I want to make a game where you can find enjoyment even in harsh conditions. But I have a tendency to quickly gravitate toward making games that are “fun right now.” (laughs)

Iwata: I don’t think that’s a bad thing. (laughs) Although, it seems that the games of today must have the quality of being fun in the first few minutes and must be controlled the way they want to be controlled.

Iwata: In E3 2004, the title that would later serve as the backbone of Steel Diver was showcased as a demo title for the Nintendo DS system. When we showed it, there was a bit of a following for it. Many people said it was fun. In that sense, I believe it had a lot of potential even at that time.

Miyamoto: Yes. That was how it all began.

Iwata: But that submarine game wasn’t made just to show at E3 2004. Since the earliest days of your career you had wanted to make a game like that. Miyamoto: Yes, I suppose so. Iwata: Was it an idea you had been building on for a long time?

Miyamoto: Well, I wouldn’t say that. (laughs) It’s just something that was stuck at the back of my mind.

Iwata: But why didn’t it see the light of day as a Nintendo DS game? By showcasing it at E3, you had favorable responses for it, didn’t you?

Miyamoto: Hmm . . . . I wonder why. I think that one reason was because my hands were already full with other titles.

Iwata: But if you said that, you’d always be too busy for it. (laughs) Let me put it another way. Why did you choose to release it for the Nintendo 3DS system?

Miyamoto: The project was on hold, and about two years after the Nintendo DS system was released, one of the teams finally had time to work on it. That’s when we resumed its development as a Nintendo DS title. But right as we were making it, the features of Nintendo 3DS system started to get fixed. So while we were developing we thought, “This would work so much better on the Nintendo 3DS system!” It’s basically a side-scrolling submarine game where you would move through a three-dimensional body of water. We thought it would look so much prettier if there was depth to it and the wide screen.

Miyamoto: It always has been a very plain game. (laughs) But it was a matter of how we could present this plain game in the best possible way. We came to the conclusion that it would look great in 3D.

Iwata: Right you are.

Iwata: Compared to an action game that are very responsive, this simulator can feel somewhat difficult. But once they overcome that, it can end up being really fun.