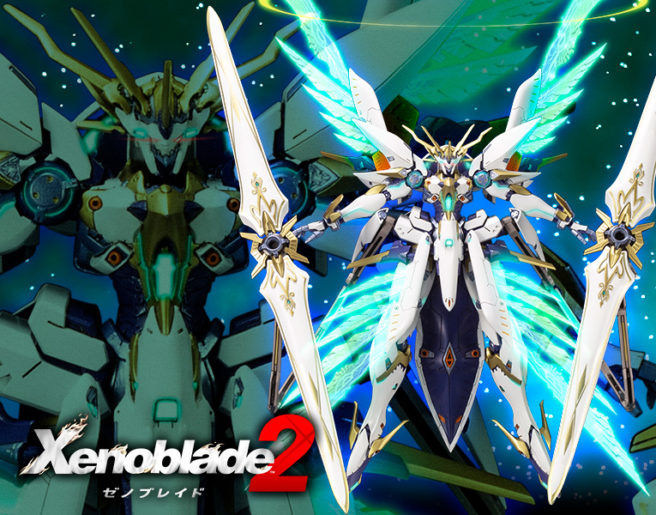 A brand new model kit based on Siren from Xenoblade Chronicles 2 recently came out in Japan. In the package, a page is included that delves into some background information about the Artifice and more.

Just to be on the safe side, you may want to complete Xenoblade Chronicles 2 before proceeding. With that said, you can find a translation from Mira below.

Siren is an Artifice (a class of terminal interface weapons) that was manufactured in the Orbital Ring, found in the lower orbit of Earth. A distinctive feature that these Artifices have is that they were not weapons created by humans. They were created by a collective of artificial intelligence known as the Trinity Processor, and designed as a class of weapons meant to be devices to the core, the Gate. Put another way, the artifices are cells of a larger autonomous system. Because of this, the weapons that were created had been created in a way that was fundamentally different from that of a human weapon.

Within the Orbital Ring, there is a massive academic institution known as Aoidos. This massive institution was formerly confined to a small university laboratory. But at the beginning of the 21st century, a scientist from that laboratory found a certain magnetic abnormal matter in Africa. This matter, later to be known as the Gate, was at first simply an intriguing artifact that was stratigraphically out of place, being so technologically advanced. As research continued, it was proven that the Gate was a perpetual motion machine that defied the laws of energy, and also that this was the source of the magnetic abnormalities being detected. In response to this, the Unified Government*1 formed a research institution for further study, and because this institution required a vast amount of resources and people, Aoidos was born.

According to a report filed ten years after the formation of Aoidos, the Gate was, as the name implied, a gate. It had the function of a door that could connect multiple universes. It is not hard to imagine, were a “Multiverse Joint” (Eng. localization: meta-universe manifold) to exist on the surface of the planet, that there would be catastrophic consequences for Earth as a whole if an accident were to happen.

During this time period, the Unified Government set up three orbital tower Bean Stalks on the equator (First tower: Rhadamanthus, second tower: Aeacus, third tower: Mīnōs), and these towers were connected to the lower orbital portion to create the Orbital Ring. This project was set forth by Aoidos, and the Orbital Ring was meant as a way to further study the Gate far from the surface of Earth. At this research facility, a governing artificial intelligence collective known as the Trinity Processor was raised to maintain the Gate. The processor, using Biocomputer elements, was raised in a virtual reality to gain a personality, and this system would be used to govern the Gate.

The Trinity Processor would go on to expand systems to govern the Gate without the interference of humans. It was during this process that many of the Artifices were created, out of necessity to protect the Orbital Ring. Rebel groups not aligned with the Unified Government were all demanding that the Gate be handed over, after all.

Because of their unique origin, the Artifices come with unique functions not found in manmade weapons. Artifices do not have any internal engine. They have a built-in system known as a Slave Generator to receive energy input from the Gate to function. Artifices all have an emerald, Gate-shaped crystal that functions as the receiver for the Slave Generator. Siren has a charged particle laser that is connected directly to the Slave Generator, and this is what makes it able to shoot a massive laser beam. In actuality, it is more accurate to say that the Slave Generator charged particle beam had some additional upgrades to make it what it is on Siren. Siren was a shining blade, a beautiful and simple device meant to be wielded against those the Trinity Processor deemed a threat. There is a design philosophy to it that won’t be found in anything manmade.

You can give the full article a look here which includes a cheeky little introduction from Muimui.