Monster Hunter Rise dev on how Switch Skills ended up in the game, balancing the weapons, more 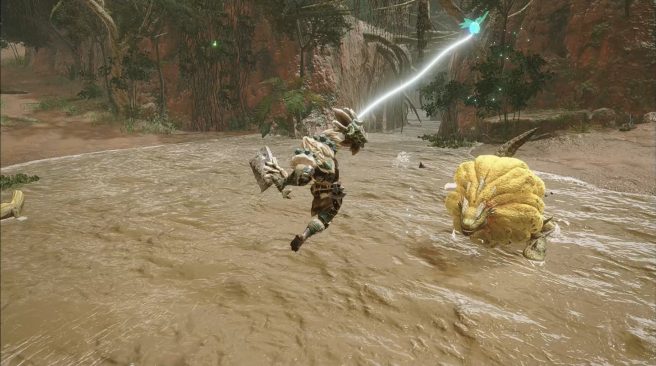 Capcom has published a new Monster Hunter Rise developer interview. This time we get to hear from Yoshitaka Mori, who was responsible for designing the player actions for all fourteen weapon types. Mori discussed a few topics such as how Switch Skills ended up in the game and balancing the weapons.

First, would you mind introducing yourself? What did you work on for Monster Hunter Rise?

Basically, I’m in charge of the game design related to the player character. I’m the main representative of creating everything to do with the hunter.

What kind of vision or direction did you have in mind for the weapon actions in Monster Hunter Rise?

For this game, obviously the Wirebugs took the main stage. It was decided from a very early point in development that we would be adding Silkbind Attacks, however we wanted to avoid a situation where battles would take place almost exclusively in the air. And a large part of the appeal of Monster Hunter comes from the major differences in actions, attacks, and movement between each weapon type. So we wanted to make sure that the movesets didn’t end up feeling samey as a result of these additions. The direction we wanted to go in was to ensure that Wirebugs would help you easily move around while your weapon is sheathed, and would provide extra depth to each weapon when unsheathed. That’s how we came up with the Wiredash and the Silkbind Attacks. During development, it was decided that the maps were going to be seamless, which made swift and smooth movement even more important, so I’m glad we decided to split up the Wirebug’s functionality in this way.

We recently revealed Switch Skills. How did those end up in the game?

We wanted to provide more varied approaches to gameplay. We introduced Hunting Styles in Monster Hunter Generations, which provided a lot of flexibility to players. By changing a few actions in each weapon type, players could come up with new strategies out in the field. There aren’t any Hunting Styles in Rise, but we tried to come up with a way to give players this kind of flexibility, even if they’re using the same weapon. That’s how Switch Skills came to be and why they generally have very specific attributes. The ones you earn later in the game won’t necessarily be stronger than the ones you earn early on, but they can be more useful in dealing with specific monsters, so you can pick the skills that best suit your play style.

There are 14 weapon types; some are melee weapons, others are ranged, and some require more inputs than others. Each weapon has its own unique characteristics, but how do you make sure all of this stays balanced?

We did it democratically and through a lot of discussion. In the early stages of development, the designers in charge of the weapons decide the weapon trees, and they determine the stats and values based on the concepts of each weapon and action, but when we reach the halfway point, the entire team will be checking and playing the game and sharing their opinions, so we can tweak and balance everything as necessary. We even switched out the designers in charge of each weapon during development, so it was actually a pretty fun process. Everyone ranging from the Director to the new recruits were eager to share their opinions, so there were a lot of comments we had to go through. I’m very grateful to everyone who helped out with this!

I was only going to pick a handful, but then you told me you wanted something for every weapon, so that’s what you’re going to get.

Great sword: The Leaping Wide Slash gains extra hits with each charge stage (so does the Plunging Thrust). We added a lot of attacks that work well with elemental weapons.

Long sword: If you successfully land an Iai Spirit Slash, you can follow up with several other moves, like a Special Sheathe, for example. And, if you press the Y Button, you can do a regular sheathe regardless of whether the counter was successful or not.

Sword & shield: If you land a hit using Falling Shadow, you’ll follow up with a Scaling Slash. But you can actually do another Falling Shadow after the Scaling Slash while you’re still airborne. Performing another takes you further up, so it’s a handy evasion technique if you managed to jump off an enemy but it looks like you might get knocked out of the air.

Dual blades: The amount of damage and number of hits dealt by Shrouded Vault changes depending on whether you’re in Demon Mode or not.

Hammer: The Charge Switch animation when going from blue to yellow doesn’t only max out your charge, but it also provides a window of invincibility during startup.

Hunting horn: You can adjust your direction 360 degrees during Crush and Double Swing.

Lance: If you keep attacking after doing a Wide Sweep, you’ll be prevented from flinching for a while.

Gunlance: Aerial Burst is tied to Charged Shelling, and can be performed by pressing the ZR button and the A Button at the same time.

Switch axe: Depending on the type of phial you’re using, it can be easier to enter the Amped State. The demo used Power Phials, which charge up the most slowly.

Charge blade: The Fade Slash in sword mode can be used in 4 directions, but you can adjust the direction 180 degrees in front of you while swinging the sword.

Insect glaive: Aerial attacks performed while bouncing up after using a Jumping Advancing Slash are now more powerful. They will keep getting more powerful as long as you repeatedly hit the enemy without landing.

Light bowgun: You can easily fire shots with a lot of recoil if you fire during a Fanning Vault.

Heavy bowgun: If you have a shield, the start of a melee attack will be able to block attacks.

Bow: The Arc Shot used in the demo was a recovery type, but there are several other effects depending on which bow you use.

Monster Hunter Rise is out now on Switch.