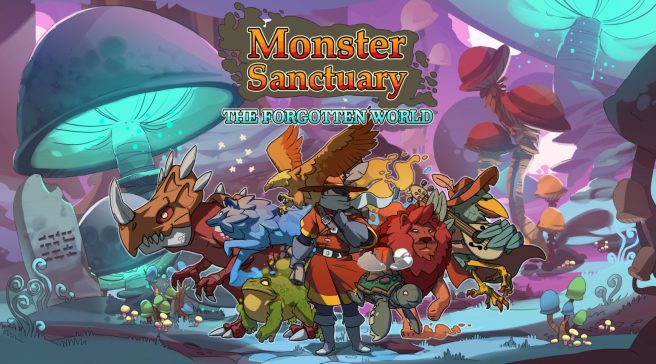 Earlier this month it was announced that Monster Sanctuary would be receiving a substantial free update titled The Forgotten World, which would bring with it a new area, new monsters, and three additional game modes, as well as other features. This update, which was expected to launch June 30, has gone live a week early, and is now immediately available to download. In a statement on Twitter, publisher Team 17 revealed that this was unintentional, but instead was done to avoid any complications with player saves.

In case you missed our previous coverage, you can read the full patch notes and see a trailer for the update below:

Encounter 9 new, ancient Monsters that were thought to be long extinct as you venture into The Forgotten World – and one new optional Champion Monster! Continue to push your team building skills to the limits, with over 200,000 Monster Team combinations.

Randomizer
All Monsters in game are randomly swapped around! Randomizer adds infinite replay ability options to Monster Sanctuary. Once activated, this game mode cannot be deactivated.

Permadeath
Once your Monster is knocked out in combat, it is permanently defeated. There is no way to revive them (except for Phoenix Affinity and Charged Rebirth). You can still use the exploration abilities of a defeated Monster. As soon as all of your Monsters are defeated, Permadeath will be disabled and all of your Monsters will be usable again!

Bravery
This mode will allow you to play with a limited selection of Monsters to test your team building skills! You will start with 3 random Monsters. In each area, you will gain one new random egg from a treasure chest found nearby the entrance to the area. You cannot gain any other Monster eggs through any other means, except for story events.
All of them can be combined with each other and New Game+. The existing difficulty modes (Casual, Normal, Master) will also work with these new game modes! These are not recommended for beginners.

Not only do the 10 new Monsters come with new skills, but the skill trees of all Monsters have been revamped with new skill nodes!
New Legendary Keepers

Monster Sanctuary is immediately available on Switch, and The Forgotten World update can be downloaded now via the eShop.