Mushihimesama getting a physical release on Switch, including collector’s edition 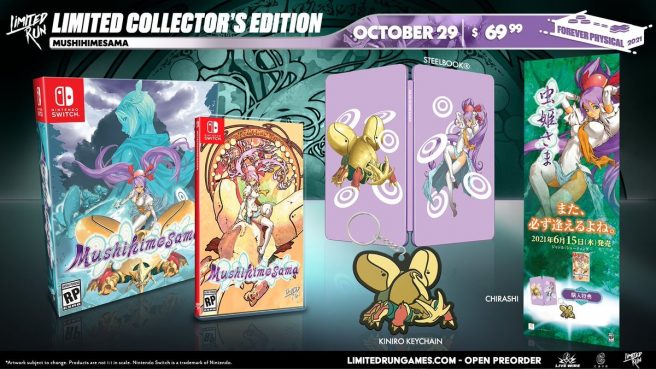 Following its previous digital debut on Switch, Mushihimesama is now getting the physical treatment. Limited Run Games will be in charge of distribution.

Mushihimesama will have both a standard release and collector’s edition. If you’re interested in the latter version, in addition to the game, you’ll receive a steelbook case, a Kiniro keychain, and a collectible chirashi.

Here’s some information about Mushihimesama:

This is the story of a princess who goes to meet the “Koujin” in order to save her family from a mysterious plague.

The world is decorated with meticulously drawn graphics, intense perfection, and a beautiful barrage of bullets. Take on five stages, including a lush forest, a blazing desert, and a solemn cave!

Get through the oncoming barrage and beat the high score!

– Three modes, including one for beginners
– You can choose the difficulty level from beginner to expert.
– Set in a fantasy world of vast deserts, lush forests, and underground caves
– Sound created by highly acclaimed sound creators both in Japan and overseas to add color to the game world.

The physical versions of Mushihimesama will be available to pre-order starting on October 29. Limited Run Games will be taking reservations here.