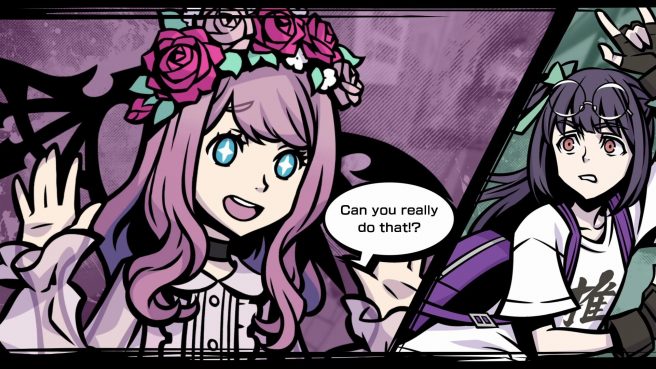 As Rindo progresses through the Reapers’ Game, he starts having visions—fragmented flashes of incidents that may soon occur. In one such vision of the future, he sees a ghastly sight: the entire city of Shibuya, crumbling into dust…

Is this an unavoidable outcome, or can Rindo change the fate of the city?

Are the Shinjuku Reapers – whose own home was recently destroyed – in any way involved with Shibuya’s impending doom?

A Reaper girl who does as she pleases, spending most of her time in Harajuku. She has little interest in her Reaperly duties, sometimes even wandering outside Shibuya. Despite her delicate appearance, she is actually quite cunning, deceiving others to help get her way – but she remains deeply loyal to her friends.

She was with Neku and Beat when a certain post-Game incident occurred three years ago.

A top influencer who blew up a few years ago thanks to his nonchalant charm and half-hearted demeanor. Recently, he
has taken the world’s young generation by storm with his calm and lazy attitude.

A popular streamer who charms his audience with his unique, high-pitched voice. He only grew comfortable with his voice thanks to Eiji Oji, however, and now hopes to collaborate with him someday…

Although he previously ran a ramen joint, a few twists and turns led him to shift his focus to curry. He is currently trying to rebrand by opening a new restaurant: SPICY CURRY DON.

Shibuya’s handyman who undertakes any task imaginable, from the unbelievably simple to the unspeakably seedy. Born with a strong “sixth sense,” he is deeply connected to the UG.

Use Imprinting to sway people’s actions!

While Rindo and the gang can’t directly interact with the denizens of Shibuya, they can “imprint” keywords in people’s heads to change their minds and influence their actions. If you can’t find a path forward, try getting someone else to forge a path for you!

Scan people’s thoughts and chat with your teammates to produce new keywords.

Combine keywords that will resonate with your target and imprint a new idea.

In Shibuya, you may also come across people who are facing problems or worries. While side quests aren’t related to the missions posed in the Reapers’ Game, you’ll be able to earn various benefits through helping the people you meet.

Depending on the situation, you may need to interact with the Reapers or members of other teams!

In addition to Imprinting, use Fret’s “Imprint” and Nagi’s “Dive” Psychs to solve people’s problems.

When an issue is resolved, the Social Network is updated, and you may be eligible to obtain a reward.

Frenzied combat with up to six party members.

Up to six characters can join the fray at one time! Even if you press buttons randomly, you’ll still be able to experience flashy and exhilarating battles with psychs flying all over the place.

But of course, that’s not the only way to enjoy combat: unleashing each psych at just the right moment will allow you to string together slick combos and tap into a whole new level of strategy. Skillfully align your entire party to topple your foes in battle!

Combat will begin shortly after you come into contact with a Noise symbol, but you can string together several encounters by touching multiple symbols in short succession. The more battles there are in a chain, the higher the item drop rate, which will earn you more pins. Beware, though: the longer the chain, the stronger enemies’ attacks will become as you proceed.

By unlocking rewards on the Social Network, you can increase the number of chain battles as well as gain the ability to draw in Noise symbols from far away.

Your team’s HP will carry over from round to round, so try not to take too much damage!

Among the enemies you will face, some will prove rather tricky to take down, splitting themselves in two or going temporarily invisible.

The Pig Noise are among the trickiest of these foes: each type requires a different strategy but poaching these pigs will earn you a handsome reward!

Some Pig Noise are easy to defeat, while others are only susceptible to psychs of a certain affinity, or only vulnerable under specific conditions.

Pig Noise will flee from battle if you don’t defeat them before time runs out, so quickly uncovering their weakness is key!

Make use of special pins.

Among the psych pins you will discover, there are “Uber” pins that boast incredible power, as well as sets known as “Pin Ensembles” that activate special abilities when equipped together. Use them well and take your Game to the next level!

Uber pins are too powerful to be wielded in great numbers – but you can equip more once you reap some rewards on your Social Network.

Pin Ensembles can be equipped by any character. Some ensembles only require two pins for the effect to kick in, while some may require as many as six pins.

Pins will level up as you obtain EXP through battles, and some may even evolve into new pins once their level is maxed out.

When pins evolve, their basic stats improve, offering more power and faster reboots. Try enhancing a variety of pins and uncover the secrets of evolution!

Some pins will only evolve under certain conditions. See if you can evolve ‘em all!

In the Snipeline Raven: A pin that activates “Protective Field,” a barrier that temporarily nullifies incoming attacks while damaging any enemies it touches.

Heartful Hot Dog: A pin that unleashes “Patrol Rounds,” a flock of bird-like boomerangs that fly toward your
enemies before returning back to you.

Raven: A pin that will fire “Homing Rockets,” a series of missiles that chase after your enemies. Change targets while charging to lock onto multiple foes.