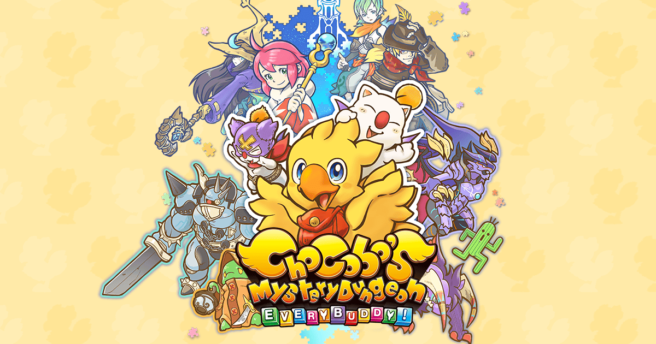 Square Enix published a new batch of details for Chocobo’s Mystery Dungeon Every Buddy today covering characters, gameplay, and more. We also have a Japanese release date trailer. Find everything rounded up below, courtesy of Gematsu.

– One day, treasure hunters Chocobo and Cid happen upon a strange town
– The town is Lostime, where the townspeople believe that forgetting is the key to happiness
– Whenever the bell on the clocktower rings, they forget their sad memories, aggressive impulses, sometimes even their own names
– Then a boy named Raffaello comes to town
– He is able to create dungeons out of people’s memories and help them remember the past

– Legendary treasure hunter
– Travels the world in search of treasure with his partner, Chocobo
– Gifted inventor
– He employs his unique gadgets to ensure that his mission will always be a success
– Wanders into Lostime while searching for hidden treasure that can change the world

– Good-hearted white mage
– Lives on her Aunt Stella’s farm at the edge of Lostime
– Always taking care of others, and is nice to Chocobo and Raffaello
– Worries a lot, but that makes her a good counter to her aunt, who sometimes seems too laid back
– Gentle but not afraid to stand up for what she believes in

– Mysterious boy
– One day, Raffaello simply fell out of the sky and into the lives of the people of Lostime
– Grows up very fast
– Can restore people’s lost memories by creating a labyrinth of memories
– Since he came to Lostime, the townspeople have started to change, and some have started to regard him as a savior
– Raffaello does not see himself that way

– Masked moogle hero
– Appears at times to give Chocobo all sorts of helpful information on dungeons
– There’s something familiar about him, but his true identity remains a secret
– A rumor persists that he is far more than just Dungeon Hero X

– By obtaining the memories of jobs during your adventure, Chocobo will be able to switch between jobs
– Job changes alter your appearance and change your abilities and stats
– There are various different characteristics per job
– Choose a job that is best suited to each dungeon to explore it efficiently
– Your jobs will level up the more you use them, allowing you learn even more powerful abilities
– Switch between jobs by touching the crystal at the dungeon entrance
– Leveling up jobs will allow you to learn powerful abilities

– This is one of the first jobs available once the job change function is unlocked
– The Knight has very high HP, strong defense, good defense against magic, and decent offensive abilities
– The Knight is very food-intensive and requires strategic use to manage hunger before the fight is over
– Ability: Power Smash – damages and knocks back a monster one space

– Powerful offensive magic
– In the beginning, it is a hard job to master, because of its vulnerability to attack and limited restoration spells
– As he levels up, the Black Mage gains a number of powerful attacks
– It’s a “late bloomer” job that specializes in offensive magic
– Possibly the best job class when it comes to instantaneous destruction
– Ability: Fire – fire-based magic attack that extends three spaces; fight while using this together with the ice-based Blizzard and thunder-based Thunder attacks

– The Final Fantasy XIV raid dungeon “The Bend of Time: Omega” appears
– Wear the uniform of the engineers faction Garlond Ironworks and investigate the formidable foe Omega alongside adventurers
– Help out your party with mysterious tools
– The Alpha job is an balanced class that specializes in everything from attack to support
– When you reach its maximum job level, you will learn the “Mysterious Card” ability
– Ability: Mysterious Card – activates one of seven abilities at random

– New dungeons have been added from the original Final Fantasy Fables: Chocobo’s Dungeon release, including difficult dungeons like the “The Bend of Time” and “Bottomless Desire”
– For these dungeons, the items you bring into and utilize in the dungeon, as well as the job you choose are essential
– Only players who are confident in their dungeon exploration skills should take on these challenges

– You will sometimes earn “Buddy Points” by defeating monsters in the dungeons
– Buddy Points accumulate for individual monster species
– When you reach the required amount of points, you can take that monster into the dungeon as a buddy character

– In addition to recruiting monsters, you will also be able to take specific character along into dungeons as buddy characters
– Each character has their own unique abilities, so choose a buddy that goes well with your job

– Get the “Buddy: Alpha” character in Japan
– This allows you to take along the previously job-only Alpha as a buddy character
– Ability: Chocobo Drop – attacks all enemies surrounding the space behind Chocobo