New discovery reveals that Zelda: Breath of the Wild’s Guardian Battle theme is an inversion of Zelda’s Lullaby

The Zelda series is known for many different aspects, but its emphasis on music is right up there. We’ve seen a number of interesting details emerge from the series’ various entries such as how the main theme for Skyward Sword is Zelda’s Lullaby when played backwards.

On the topic of Zelda’s Lullaby, that comes into play once again for Breath of the Wild. It turns out that the game’s Guardian Battle them is an inversion of that classic song.

So I was listening to the BOTW soundtrack and came across this piece (https://www.youtube.com/watch?v=6JsHo5sc0OU) and noticed at about 21 seconds you hear a piano play the notes of Zelda’s lullaby, starting on the same high note (a high B) as is used in the intro to the Guardian Battle theme (https://www.youtube.com/watch?v=Pq3nncuA1Ak). That got me thinking there might be a connection between the two pieces.

First thing I thought was they are both in 3 time (probably a coincidence), and then I looked at the main notes being played in the Guardian theme. The piece mainly hammers out the notes B, F#, and A (in that order).

The notes in Zelda’s lullaby are B, D, and A (in that order).

Both tunes go up a minor third and down a fourth, just in different orders – they’re sort of inversions of each other!!!

This makes sense as Zelda’s research was critical in restoring the guardians and the ancient Sheikah technology, so I wouldn’t be surprised if the same theme has been scattered throughout the other more technological-sounding pieces in the game… 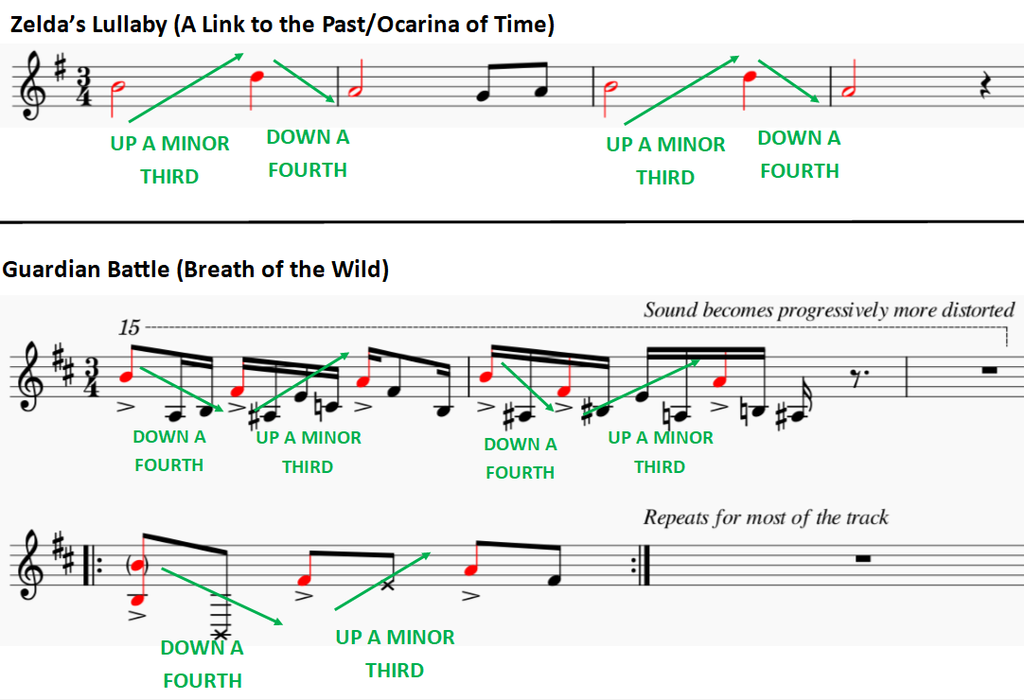 Zelda: Breath of the Wild’s soundtrack is a bit more subdued compared to other entries in the franchise. However, the game does reuse and reference other tunes from the series. This is just one interesting way in which Nintendo revisited one of Zelda’s most iconic pieces of music.