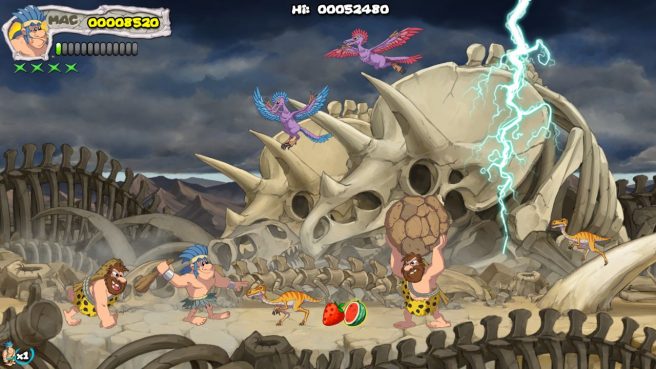 A new round of gameplay has come in for New Joe & Mac: Caveman Ninja. 17 minutes of footage has been published.

Here’s an overview of the title with further details:

We’re back in the distant Past, when “Rock & Roll” was just about rocks and “Fast food”, a dinner that you couldn’t catch.

2 cave dudes named Joe & Mac live in a peaceful and cool village. Cool it was, until a bogus bunch of Neanderthal snatched all the village’s women.

It’s now up to Joe & Mac to save them all, and fight against deadly dinosaurs and carnivorous plants in this crazy and colorful action-platformer from Jurassic time, with completely redesigned graphics!

The HD version of this famous arcade game is still fun and quirky, but also longer, better, faster, stronger…

– MAKE YOUR WAY through this PRE-HYSTERICAL JUNGLE: Run, jump and fight through varied side-scrolling 2D stages in a true arcade game style

– A BRAND NEW DESIGN: Experience a full and faithful remake of the arcade original game with new graphics, new sounds, and better control for an unprecedented experience

– NEW MODES: 2 modes are on the menu, the arcade Mode (Remake) and an extended mode that will bring you a longer game experience.

– CO-OP MODE: one pre-historical dude may be not enough, ask a friend to play with you to share a stronger adventure.

– EACH MODE WILL HAVE NEW FEATURES: a training mode, a boss rush mode, a score attack mode and, to play faster than ever, a speedrun mode!

Check out the gameplay for New Joe & Mac: Caveman Ninja below.

New Joe & Mac: Caveman Ninja is out now on the Switch eShop, with a physical version following on December 13. It comes with English, German, French, Spanish, Dutch, Italian, and Russian languages.