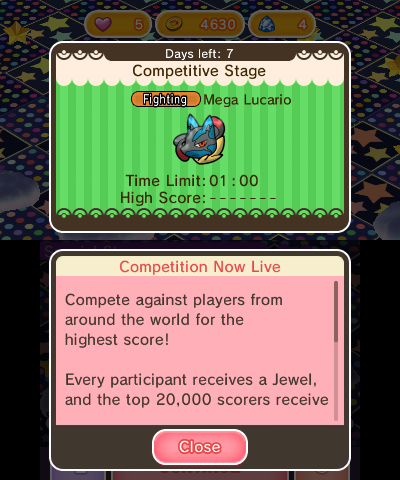 Pokémon Shuffle has been delivering new events every week since its launch, allowing players to catch the likes of Mew, Kyogre, and Rotom. This week is no different.

If you go to Check In on Pokémon Shuffle, you’ll be given the chance to face Mega Lucario. This one’s a little bit different, as once you defeat Mega Lucario, you’ll be awarded with the Lucarionite and a Jewel. There is one catch, however: Only the top 20,000 players in the west and 50,000 in Japan will be able to receive the Lucarionite for their Lucario (Lucario can be obtained through the special EX stages). As of this writing, we don’t know if the Lucarionite will be given by any other means, so Check In as soon as you can!

The Mega Lucario event will run for one week only.