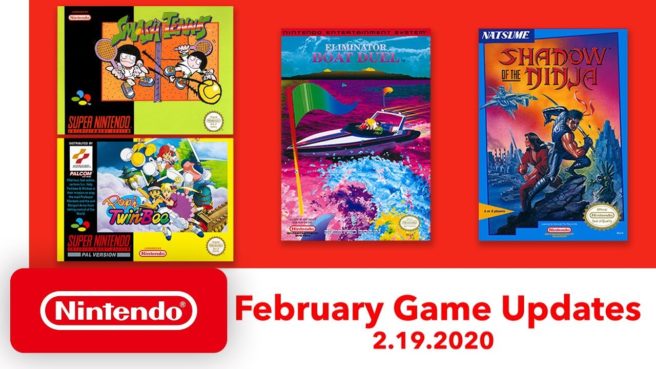 Nintendo has revealed a new set of games that will soon be added to the Nintendo Switch Online service.

For the SNES app, Pop’n TwinBee and Smash Tennis are on the way. The NES edition is getting Shadow of the Ninja and Eliminator Boat Duel. All titles are slated for February 19.

Here’s information about all of the games, plus a trailer:

Pop’n TwinBee – The sixth game in the TwinBee series, this vertically scrolling shooter takes place in a cute, poppy setting. TwinBee and WinBee hear that the great Dr. Murdock has lost his wits, so they set off to return him to his normal self. This game was originally released in Japan and Europe in 1993, but this will be its first release in the U.S.

Smash Tennis – In Smash Tennis, the controls may be simple, but there’s plenty of room for skill! With strong shots, weak shots, lobs and eight different court types, you can develop all sorts of approaches, unlocking the deep strategies of tennis. This game was originally released in Japan in 1993 and Europe in 1994, but this will be its first release in the U.S.

Shadow of the Ninja – In the midst of disorder and oppression, two shadow warriors rise to the people’s cry for help. Choose to play as one of two ninja masters from the Iga clan as they infiltrate enemy front lines. Master tactics of stealth as you acquire additional weapons and power-ups in order to overthrow an evil emperor and destroy his wicked empire, solo or with a friend.

Eliminator Boat Duel – In this powerboat racing game, get behind the wheel of one of the fastest machines on the water to earn boatloads of in-game cash. Drivers earn thousands of dollars for competing, and you’ll use your winnings to repair and upgrade your boat to push your competitive edge to its maximum. A little aggression goes a long way – just try not to get sunk yourself, or you’ll be swimming back to dry land.