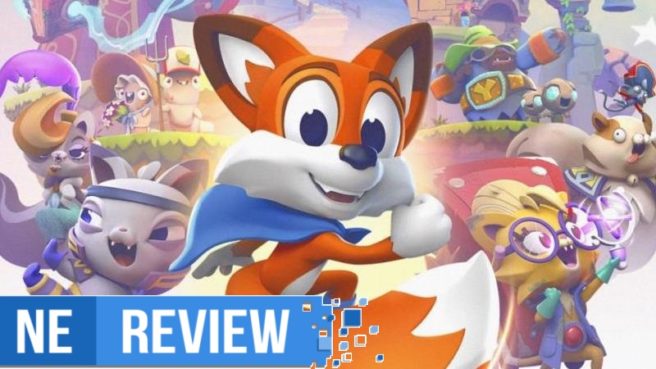 When many think of Nintendo, they see a single word pop into their minds: platformers. Nintendo has remained steadfast in its commitment to the platforming genre for decades, even as the gaming landscape has shifted and evolved around them considerably. Third-party and indie developers have long relied on this association too, and have routinely seen the lion’s share of their success on Nintendo consoles come from releasing platforming adventures with mass appeal. As a result of all this, you could say that the watermark for platforming excellence is considerably higher on Nintendo consoles than it is elsewhere, considering the long lineage of quality that already exists. I’m here to tell you that this watermark has been adequately met – and in some ways even exceeded – by New Super Lucky’s Tale.

Part remake, part remaster, New Super Lucky’s Tale is an attempt by developers Playful to revisit its 2017 title Super Lucky’s Tale, and to tighten and refine the overall experience in order to address some of the criticisms leveled at that game. Granted, if you haven’t played the original then these changes will go completely unnoticed, but for those that have, it’s worth mentioning that a lot has changed in the two years since Super Lucky’s Tale released. Everything from the often-troublesome camera, running animations, the lighting, and just about every other aspect of the overall presentation has either been retouched or completely remade from the ground up. It’s clear from these changes that Playful now has a very concrete image in mind of how Lucky and his surroundings should look and feel.

Speaking of which, Lucky, his mates, and their respective homes all look fantastic on Switch. Each world you visit (and the stages they contain) have a distinctively unique atmosphere that benefits greatly from the improvements made to this version of the game. I was genuinely excited each time I got to visit a new world and speak to its inhabitants, as the creativity on display in this regard is impeccable. From hillbilly worms to “muscle-bro” yetis, the game constantly has a new way to surprise and delight thanks to the people and places you encounter. All the better too, because in typical platformer fashion, Lucky is practically mute through much of the game’s story. He’s adorable, don’t get me wrong, but perhaps a little more meat on his character beyond being faultlessly optimistic and smiley the entire time would have added further to the experience.

With Lucky himself in mind, it’s worth mentioning the driving factor behind his world-hopping japes. The game see’s Lucky being separated from his older sister, who voices a really engaging scene-setter of an opening cinematic. Following this, he must navigate through a variety of worlds all contained within an in-game book (“The Book of Ages”), freeing each of them from the evil clutches of a frighteningly large cat called Jinx and his kids, the “Kitty Litter”. Each member of the Litter serves as the boss for each respective world, and there’s always a consistently humorous way in which the locals are being terrorized by Lucky’s adversaries. It’s all very innocent and non-threatening, and it harkens back to the kinds of adventures we enjoyed during the 90’s in the likes of Super Mario 64, Crash Bandicoot, and Spyro the Dragon. 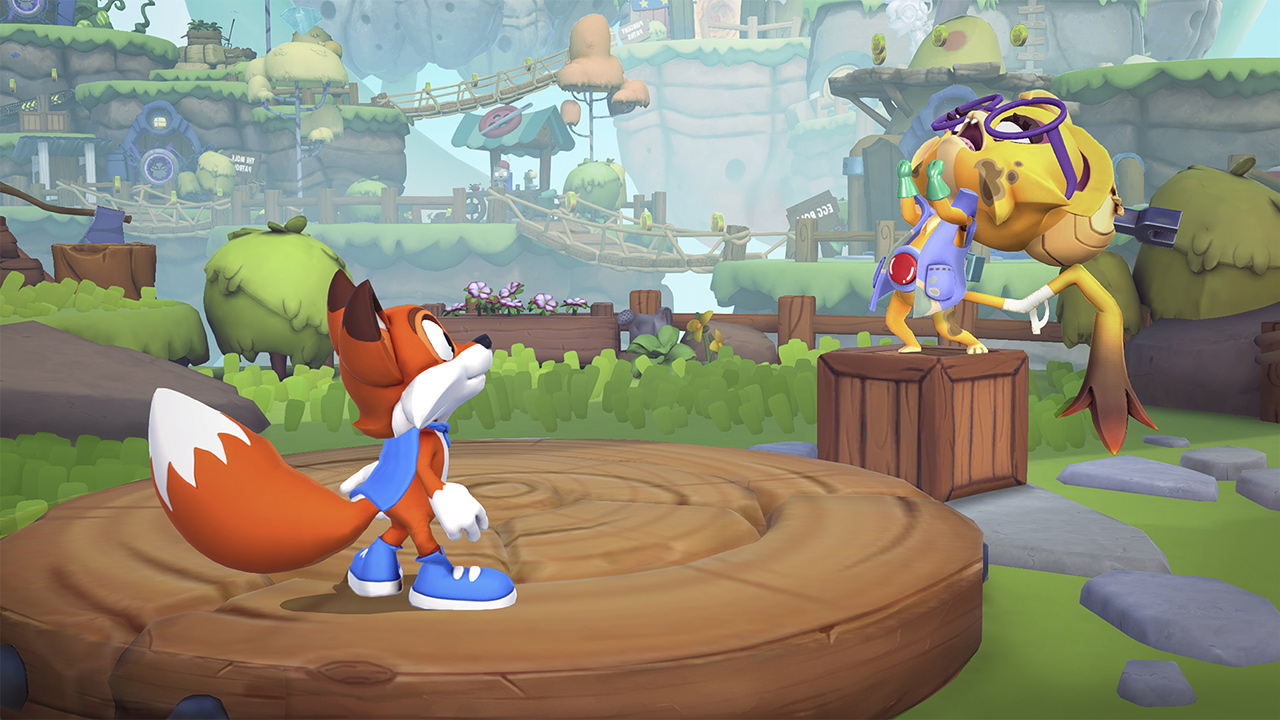 Even the format of Lucky’s adventure adheres closely to those older games. Each world is freely explorable in 3D with a variety of stages accessible through gates. Once in these levels, Lucky must secure at least one of the four available “pages” to unlock the singular boss gate contained in each world, and to advance further in the story. Pages are found either by reaching the end of the stage, by finding them hidden in the environment, by collecting the letters “L-U-C-K-Y”, or by gathering 300 coins in each level. Whilst most stages could be considered relatively easy, some of the later levels border on the impossible when trying to secure all of the available pages – this endeavor alone should provide all the replayability needed for the completionists among you. The variety of each stage is a standout feature too – there’s a healthy mix of 3D sandboxes, sidescrollers, and even a few endless runner style levels thrown in for good measure. It’s safe to say Lucky is kept on his toes, and whilst the game might not be have the boundless variety of something like Rayman Origins, I can safely say I never felt like I was doing the same thing too often.

This variety is further aided by Lucky’s moveset as you navigate the game’s hazards. There’s been a clear attempt by Playful here to offer a similar kind of free-form movement to the kind we’ve experienced in Super Mario 64 and Super Mario Odyssey in that you’re not strictly limited to a simple jump and singular attack. Instead, Lucky can contextually either burrow underground or slide along hard surfaces by pressing either of the triggers. If Lucky is in the air, his “burrow” will lock onto enemies allowing you to chain attacks together and stay out of danger rather effortlessly. It doesn’t quite reach the lofty heights of athleticism featured in Mario’s 3D outings, but there’s a decent amount of wiggle room for you to experiment when dispatching foes and exploring the environment. 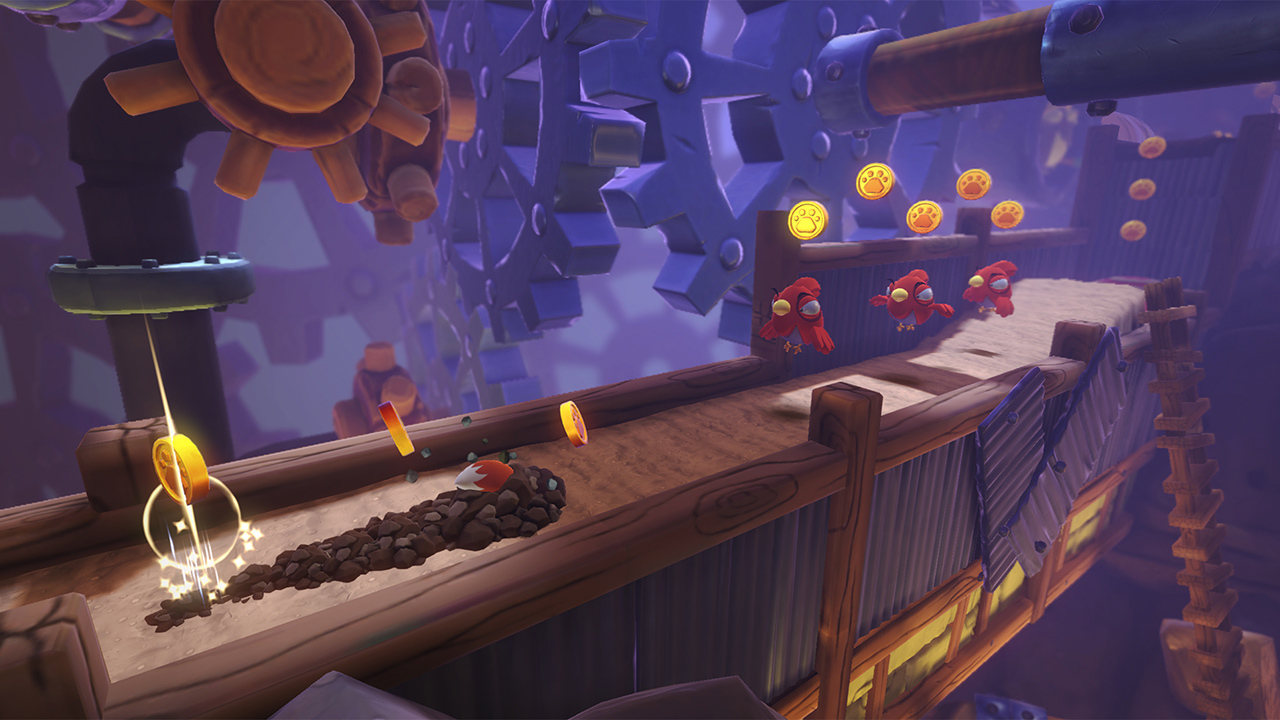 It’s difficult to quantify just how cohesive New Super Lucky’s Tale feels as a platformer now that Playful has gone back and given the experience some much needed TLC, but I feel one area that deserves particular mention is the audio. It’s incredible. It exhudes charm and character, and just oozes with the kind of creativity we’ve come to know from the best the platforming genre has to offer. The voices, the sound effects, Lucky’s little feet as he pitter-patters around the place and oh-my-word the music – it all feels like the gel that holds the experience together. There are hints of inspiration from the best of what Rare and Media Molecule have provided us in the past – especially when you listen to the instrumentation of the music – but it has a unique identity all of its own, too. It’s elements like this, along with the character design, the writing, and the overall variety on show, that make New Super Lucky’s Tale feel right at home on a Nintendo console as an excellent platformer.

When I first laid eyes on Lucky, through the lens of an Oculus Rift some years ago, I saw a spark of creativity that wasn’t yet fully formed. When I saw him again on Xbox One a few years later (in passing this time), I witnessed that same spark muddied in a pool of platforming kryptonite – namely, a poor camera, bland presentation and a lack of cohesive design direction. Now, in 2019, I’m looking upon Lucky again as he smiles back at me (through a vastly improved camera), and I’m wondering just how developer Playful has managed to gather its resources and “right the ship” in the way that they have. It’s exceedingly rare these days to see a development studio take its community’s feedback to heart in a genuinely earnest way, and it’s even rarer to see a team return to an existing title in the short space of two years and effectively remake it so that it can fully realize its true potential. Playful has done all of that and more with New Super Lucky’s Tale, and its opening statement to discerning Nintendo and platformer fans is one of impeccable strength and creative muscle.

New Super Lucky’s Tale review copy provided by Playful for the purposes of this review.