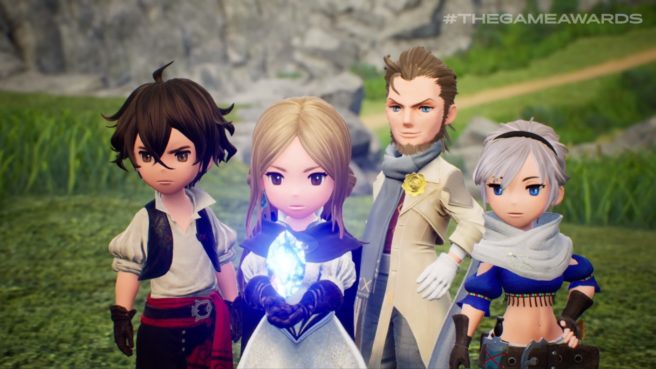 Nintendo has put an announcement recapping some of the Switch-related news shared at The Game Awards 2019. The company highlighted the announcement of Bravely Default II as well as the new trailer for No More Heroes 3 and latest DLC news for Marvel Ultimate Alliance 3.

During a night celebrating the video games of the past year, fans watching The Game Awards got a sneak preview of several exciting new experiences coming exclusively to Nintendo Switch in the near future.

Additionally, a new trailer for No More Heroes 3, the latest entry in the No More Heroes series from developer Grasshopper Manufacture, unveiled that the game is launching for Nintendo Switch in 2020. After the official numbered series’ 10-year hiatus, the “assassin action game” is back featuring the all-American No. 1 ranked assassin, Travis Touchdown. This time, the otaku assassin must face off against some super hardcore enemies from space with his beloved Beam Katana in hand.

“With so many fans and gamers watching, The Game Awards is the perfect place to celebrate the best of the video game industry in 2019 and provide a peek at some upcoming experiences for 2020,” said Nick Chavez, Nintendo of America’s Senior Vice President of Sales and Marketing. “As we close out an outstanding year for Nintendo, we hope gamers are looking forward to the new year after getting just a taste of the exciting things coming to Nintendo Switch.”

Finally, Nintendo also announced this morning that from now until Dec. 18 at 11:59 p.m. PT, players can save up to 50% off select Nintendo Switch digital games, including titles that have received top honors throughout the history of The Game Awards. Fans can visit Nintendo eShop on Nintendo Switch or https://www.nintendo.com/tga now for the full list of promotions on the digital versions of select games.

For more information about The Game Awards, and a full list of winners, visit https://thegameawards.com/.

Remember that Nintendo Switch features parental controls that let adults manage the content their children can access. For more information about other features, visit https://www.nintendo.com/switch/.