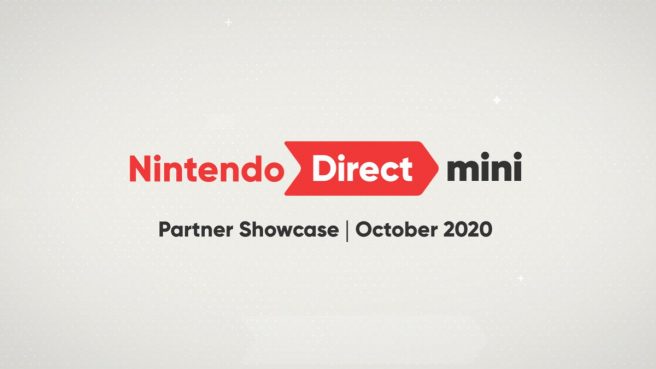 The final Nintendo Direct Mini: Partner Showcase had plenty of news, and Nintendo has now recapped everything shown in the presentation in an official press release. We have the recap announcement below.

During the last Nintendo Direct Mini: Partner Showcase of the year, Nintendo provided information about a variety of games coming to the Nintendo Switch family of systems from development and publishing partners like SQUARE ENIX, Remedy Entertainment, Koei Tecmo Games and HAL Laboratory. Games featured in the video presentation include anticipated RPG sequel BRAVELY DEFAULT II; farming and lifestyle sim STORY OF SEASONS: Pioneers of Olive Town; Greek mythology-inspired action-adventure game Immortals Fenyx Rising; Nintendo Switch versions of HITMAN 3 and Control, which are both played via cloud-streaming technology; and over-the-top action game No More Heroes III. There was even the surprise reveal that the original No More Heroes and No More Heroes 2: Desperate Struggle, which originally released for the Wii system, are now available exclusively in Nintendo eShop on Nintendo Switch.

But that’s not all that’s coming to Nintendo Switch today! The Nintendo Direct Mini: Partner Showcase also announced that the adorable and out-of-this-world puzzler Part Time UFO from HAL Laboratory, the developers of the Kirby series, as well as a free demo for the Hyrule Warriors: Age of Calamity game, are both now available in Nintendo eShop on Nintendo Switch.

“Even though this is the final Nintendo Direct Mini: Partner Showcase of the year, the Nintendo Switch games from our development and publishing partners are still coming on strong,” said Steve Singer, Nintendo of America’s Senior Vice President of Publisher and Developer Relations. “Through these video presentations, we are able to show the breadth of creative and diverse experiences that can be found on Nintendo Switch.”

To view the Nintendo Direct Mini: Partner Showcase video in its entirety, visit https://www.nintendo.com/nintendo-direct/10-28-2020/. Some of the highlights revealed in the video include:

Control Ultimate Edition – Cloud Version: Winner of more than 80 awards, Control is a visually stunning third-person action-adventure that will keep players on the edge of their seat. Blending open-ended environments with the signature world-building and storytelling of developer Remedy Entertainment, Control presents an expansive and intensely gratifying gameplay experience. Control Ultimate Edition – Cloud Version* is available now on Nintendo Switch!

Hyrule Warriors: Age of Calamity: Before the Hyrule Warriors: Age of Calamity game launches for Nintendo Switch on Nov. 20, fans will be able to try out a free demo for the game, available now in Nintendo eShop. The action-packed story is set in Hyrule 100 years before the events of the Legend of Zelda: Breath of the Wild game. The demo will let players experience the fast-paced action and dramatic cutscenes, which shed light on the events that led to the Great Calamity. During the Nintendo Direct Mini: Partner Showcase, it was revealed that the massive, screen-filling Divine Beasts will also be playable in the game. Using the over-the-top powers of the Divine Beasts will surely help players find victory when used in their respective stages.

Immortals Fenyx Rising: The fate of the world is at stake. Play as Fenyx, a new winged demigod, on a quest to save the Greek gods and their home from a dark curse. Take on mythological beasts, master the legendary powers of the gods and defeat Typhon, the deadliest Titan in Greek mythology, in an epic fight for the ages. Immortals Fenyx Rising launches for Nintendo Switch on Dec. 3, with pre-orders beginning today!

BRAVELY DEFAULT II: Brought together by fate, four heroes will embark on a great voyage in the beautiful and engaging role-playing game BRAVELY DEFAULT II from SQUARE ENIX, the creators of the FINAL FANTASY series. In the series’ new adventure, players will set off on an epic journey, visiting stunning locations, meeting intriguing characters and battling dastardly villains. By defeating enemies called Asterisk bearers, the heroes will acquire Asterisks, which allow them to change jobs. By using the right combination of jobs, players can turn the tide of battle in their favor. Some of the jobs that can be acquired include the powerful Vanguard, the White Mage, the Bard, the Beastmaster and the Gambler, among many others. After a demo version of the game went live in March, the developers collected player feedback about things like difficulty and controls to improve the overall game experience. A video addressing the helpful fan feedback will be posted on the BRAVELY DEFAULT II website and on YouTube later today. BRAVELY DEFAULT II launches exclusively for Nintendo Switch on Feb. 26, 2021.

STORY OF SEASONS: Pioneers of Olive Town: Cultivate a farm from the ground up! Chop down trees! Discover flora and fauna! Raise animals! Experience all of this and more as part of STORY OF SEASONS: Pioneers of Olive Town, the newest game in the original farm simulation series, coming to Nintendo Switch on March 23, 2021. Will players sow fields and grow a cornucopia of colorful crops? Or construct a massive ranch with lots of animal pens? How players choose to live their farm life is completely up to them.

HITMAN 3 – CLOUD VERSION: HITMAN 3 is the first time the HITMAN series has been on Nintendo Switch and represents the dramatic conclusion to the World of Assassination trilogy. Whether players are new to the franchise or familiar with the series, they’ll enjoy a globetrotting adventure to sprawling sandbox locations as Agent 47 returns for the most important contracts of his entire career.

Part Time UFO: From HAL Laboratory, the developers of the Kirby series, comes Part Time UFO, a colorful game in which players take on the role of an adorable (and helpful!) UFO. From dishing up sweets, to fishing, and building a castle, the little UFO will perform all sorts of part-time jobs. Players can clear stages by carrying the required object, but more rewards will be earned by completing three specific challenges per stage. By passing a Joy-Con controller to a friend or family member, two people can perform jobs together! Part Time UFO is available now on Nintendo Switch!
Surviving the Aftermath: Survive and thrive in a post-apocalyptic future – resources are scarce, but opportunity calls. Players can build the ultimate disaster-proof colony, protect their colonists and restore civilization to a devastated world. Remember: The end of the world is just the beginning. The Nintendo Switch version of Surviving the Aftermath launches in spring 2021.

Tropico 6 – Nintendo Switch Edition: El Presidente is back! In Tropico 6, players have the fate of their island in their hands. Build and rule an island nation on large archipelagos, take care of subjects’ needs and send agents to steal world monuments. Tropico 6 lands on Nintendo Switch on Nov. 6. Pre-orders for the game begin later today.
Bakugan: Champions of Vestroia: Fierce strategy plus epic action equals Bakugan! It’s up to players to build the best team and duke it out in high-energy battles. Become the ultimate champion in Bakugan: Champions of Vestroia, launching exclusively for Nintendo Switch on Nov. 3.

Griftlands: Nintendo Switch Edition: Sharp negotiating skills are a must when playing Griftlands, a deck-building roguelite game. Every decision matters in each playthrough, whether it’s the jobs players take, the friends they make or the cards they collect. Explore the gritty sci-fi world of Griftlands when it launches on Nintendo Switch in summer 2021.