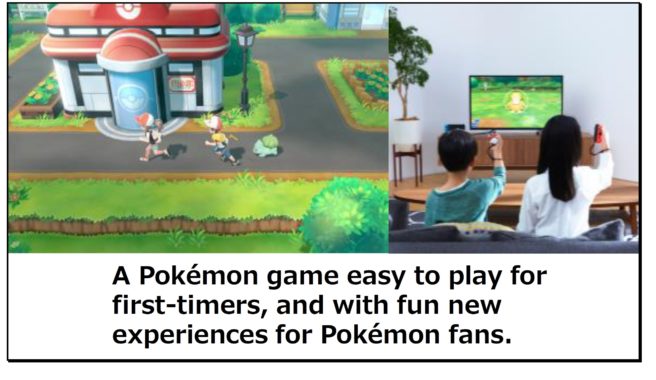 This title is designed to be enjoyed by everyone. It is easy to play for people new to the Pokémon series, and endearing to fans of the Pokémon games. The title is based on Pokémon Yellow Version: Special Pikachu Edition, which was released for Game Boy in 1998, but this title offers completely new experiences. For example, the gameplay reflects Pokémon Go, and to catch a Pokémon the player swings the Joy-Con in an action similar to throwing a Poké Ball. In addition, by sharing the Joy-Con, two people can play at the same time in the same game, which is a first for the series.

The Poké Ball Plus will be released at the same time as a play accessory for this title. This Poké Ball Plus can be used instead of the Joy-Con as a game controller and “thrown,” so to speak, to capture Pokémon as a trainer. Further enhancing the realism of the experience, the player hears a sound and feels something in the palm of their hand when they succeed in capturing a Pokémon. In addition, players can take their favorite Pokémon from Pokémon: Let’s Go, Pikachu! and Pokémon: Let’s Go, Eevee! out into the world outside of the game and, as they walk around, it feels like the Pokémon is actually inside the Poké Ball Plus. More than half of all consumers who have pre-ordered this title chose the software bundled with Poké Ball Plus. Poké Ball Plus can also connect to Pokémon GO so that users can
continue playing without continuously looking at their smartphones.

We have created various special bundles for those consumers looking to purchase a system together with software.