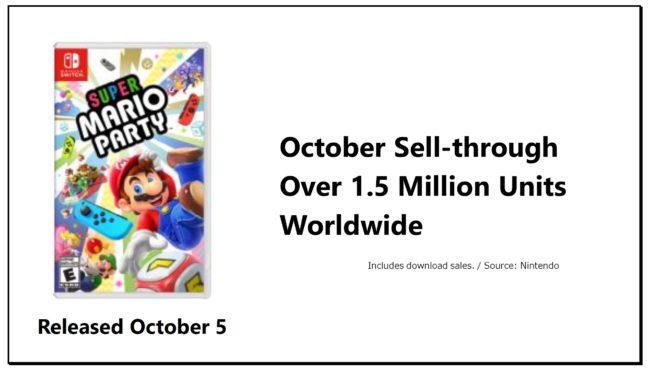 Super Mario Party is the newest installment in the Mario Party series that is also a return to the series’ roots for reworked, less complicated game mechanics. It is a title packed with gameplay enjoyable by all, and that speaks to the “play anytime, anywhere, with anyone” concept of Nintendo Switch. It is a finished game with an appeal that is immediately apparent, and a game that everyone from regular gamers to newbies can enjoy playing together. We expect it to become an evergreen title for scenarios like parties where people come together.

The good evaluations by consumers have been borne out by the recent sell-through. Global sell-through has exceeded 1.5 million units following its release on October 5. Super Mario Party had an extremely strong start compared to other installments in the series and has built up momentum ahead of the holiday season. We are also seeing an increase in Joy-Con sell-through with the release of this title.

Sales will grow even further if more scenes play out between now and the end of the year where this title is played in places where people gather together. Super Mario Party is the kind of title that is easy to play, even by people using Nintendo Switch for the first time. This has the potential to drive hardware sales because people may get the urge to buy this title along with Nintendo Switch when they get together to play.