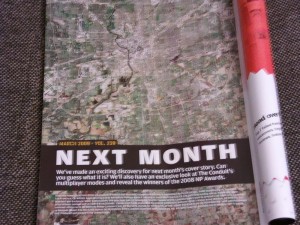 Nintendo Power usually has a few tricks up their sleeves for most of their issues. The March 2009 volume of the magazine will follow in the same tradition – the magazine is claiming an “exciting discovery” will be present in their next issue. Nintendo Power states, “We’ve made an exciting discovery for next month’s cover story. Can you guess what it is? We’ll also have an exclusive look at The Conduit’s multiplayer modes and reveal the winners of the 2008 NP Awards.” The picture included with the tease is just a map (see above), which might cause any guessing to be difficult. Anyone want to take a gander?