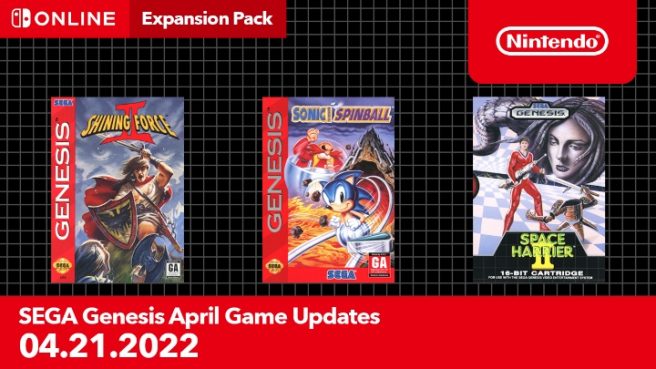 Three more games have just debuted on Nintendo Switch Online, including Space Harrier II, Shining Force II, and Sonic The Hedgehog Spinball. They can be played with an active subscription to the Expansion Pack tier.

Here’s an overview of the three titles:

A celebrated launch title for the Genesis / Mega Drive. In this sequel to the popular 3D shoot-em-up, Harrier takes to the skies once more to defend Fantasy Land from a mysterious invader.

The second entry in the popular tactical-RPG series, featuring even more strategic combat. Sir Astral’s squire, Bowie, must assemble an army of light from all the world’s races to stop evil from overtaking the land.

The world’s fastest hedgehog bursts onto the pinball scene in an all-new adventure! In this action pinball game anyone can pick up and enjoy, gather the Chaos Emeralds and save four worlds from Dr. Robotnik.